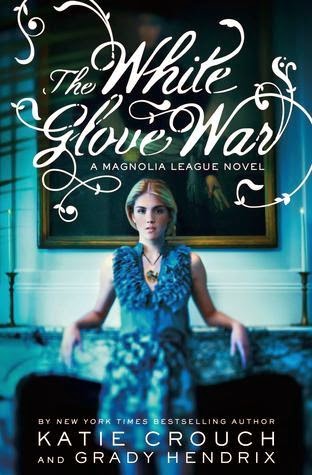 I got ahold of an ARC of this book from the YA Book Exchange.  It's been out for about 2 years now, but I haven't had a chance to get a copy of it until I found it there. When I first started reading it I was a bit confused.  What I remembered from the fist book, The Magnolia League, was Alex's story.  And this book actually is told from two viewpoints.  It doesn't start with Alex though, and that is what got me confused I think.  It started with her friend Hayes.  But once I got into the book, I really was glad to get two sides of the story.  And it looks as if there should be a third book, that would follow Hayes, or at least trying to find and save her.  Again, if you haven't read the first book, go click on my link to it above and read that.  My review below might spoil it for you.

So Hayes is ready to be a part of the Magnolia League with her mother and grandmother.  Turns out though that her family and Alex's family haven't really ever gotten along. There has been a rivalry since the beginning.  Alex only wants to get her mother back.  And so she is trying to get in good with her grandmother in order to learn the things she would need to try to bring her mother back to life.  Never mind that this is against the three types of magic the Magnolia girls are not supposed to try.  Not only that, but her grandmother has trapped her mother in the blue room of her house, another type of magic not supposed to be done.  Someone has called on an evil spirit, The Gray Man, to hurt Alex, the same person who wanted her mother dead.  There are lots of secrets in the League.  And Alex has made a deal with Sina to get her mother back, in exchange for helping Sina bring down the Magnolia League.  The Gray Man takes over Alex and causes her to be hateful to her friends, not to mention almost making her drive head on into oncoming traffic, which would have killed her, but also Hayes who was in the car at the time.  Hayes's brother is still in love with Alex it seems, even after what happened in the last book.  And of course there is the third friend in the book, Madison.  Who may be able to help as an outside party between the two girls.  But her grandmother will also break one of the three spell rules.  All of these things could bring down the League if their hoodoo supplier, Doc, were to find out.

There is lots of suspense.  So many moments of what next!  It was hard to put down, and as good a read as the first one, once I kind of figured out where I was.  I mean, you have to give me a bit of a break, I read the first one summer of 2011.  There is no 3rd one listed on Goodreads, at least not under the first author's name.  So I had to tweet her and ask if there was a third one in the works!  Because it definitely didn't end with this book.
Posted by Lisa Mandina at 9:00 AM