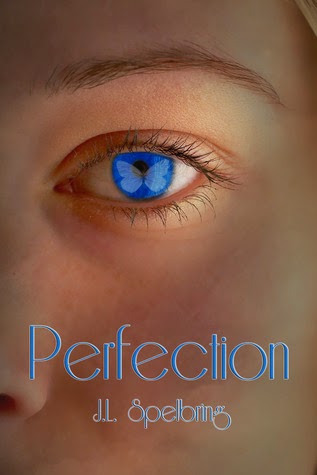 First thanks to Spencer Hill Press and Netgalley for allowing me to read an e-galley of this title.  It actually came out this July, at least in the US.  And I think the sequel, Flawed, which I also have an e-galley of, comes out in August.  So it is nice having them to read together.  Although I tend to read an e-book/galley then a physical book, so as to try to keep up on all my TBR piles, both real and virtual.  So I will be reading the sequel after the book I'm reading now.  Anyway, I was intrigued by the synopsis of this book.  It is dystopian for sure, but it is also an alternate history story, something I haven't read much of, but have always been intrigued.  This one is set in a world where Hitler won the war.

The main character is Ellyssa, and she was created by who she calls her father, Dr. Hirch.  He is planning to complete Hitler's dream of the perfect Aryan pure race.  And so he is creating children in his laboratory, at The Center.  Not only are they creating the perfect children, with special traits, they are also training those who are "almost" perfect to be the police force, basically a present day Gestapo.  The story begins with Ellyssa running away from the Center.  She's found something in the files that she isn't supposed to read that make her not want to be a part of all of the testing and plans.  It all began when she heard a young man saying "Kansas City" to her as he was being dragged down the hall.  But he wasn't saying this out loud, it was in her mind.  And he did this several times, until she knew that he was dead, killed as other Renegades were.  Renegades are the people that wouldn't be part of the Pure Race.  In this alternate time, people are blond, different shades, and only Ellyssa's white blond hair is really the "perfect" color.  Blue eyes are the norm, as well as the light color skin.

Of course as soon as Ellyssa is found to be missing, they send out one of their Gestapo detectives, Ms. Petersen.  So now she is on the run.  She finally is able to get away and get on the train, she knows she must head to Kansas City.  That is where the boy told her.  But soon someone figures out she is on the train, and so now she must jump, even though the train is still going at normal speed.  She isn't really concerned, as her advanced physical traits should help her to make it off with as little injury as possible.  Unfortunately it isn't that easy, and she does become injured.  Not only that, she had to leave all her food and supplies on the train.  She trudges along, until finally she can go no more and sees a small ghost town.  I believe it is called Deepwater in the book.  When she stumbles into a store and thinks she will hide there from those chasing her, she runs into some renegades. And while her superior fighting skills help her at first, she is knocked out and taken back to their camp.

This is where she meets Rein and his brother Woody.  The leader of this group of Renegades is named Jordan, and if he can accept her, then the rest of the group should too.  But as she grows to know them, and see just how wrong what her father was doing, she also knows that she is now putting them in danger, since she is being looked for.  And she doesn't know the lengths that her father will go to to get her back.  But knowing what the final plan is according to the files she found, she only knows she must protect these people, all people, and that will mean going back to the Center.

Definitely a good read.  I was very interested in how things were working.  I would like to know more about the actual society, maybe some more of the history of the time period between the end of the war and "today".  We did get some information later on in the story, which in a way, I kind of like now that I think about it after finishing the book.  When I started I felt like I needed to know more about what happened to make her run away.  But the way it was worked into the story was really pretty great.  As Ellyssa let down her guard and learned more about the world and people outside of her home, we also kind of learned more about her.  I will be interested to read the sequel and see what will happen after where we left off.  And, as I have lived in Missouri my whole life, I love that this story is set for the most part in so many Missouri places!  Places I've lived or been.  For instance, they talk about Warrensburg, and that's where I went to college!  So, I was hooked from that point on.  Plus, partly in Chicago, I am a big fan of the city Chicago.
Posted by Lisa Mandina at 9:00 AM