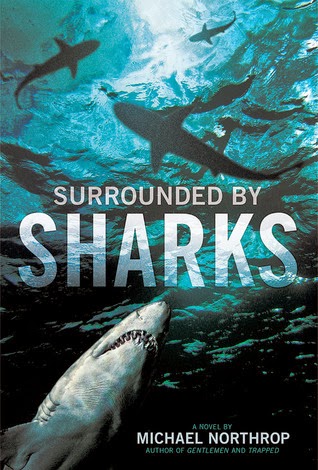 I was lucky enough to get an e-galley of this title from Scholastic through Netgalley.  I am a fan of this author, at least I enjoyed another one of his books, Trapped.   I've also been fascinated with sharks, really who hasn't, for a long time.  I remember watching Shark Week when it first started.  Now as cool as I think sharks are, I don't really want to go swimming with them. Especially not in this type of a situation.

The main character is Davey.  He is a quiet, bookish type of boy, about 14 I think.  His family is on vacation, near Key West, but on a much smaller island nearby.  He wakes up before the rest of his family, pretty early, and decides to take his book and go out on the beach and read where he won't have to deal with the snoring of his brother and father.  He can't really just go back to sleep, you see he had to sleep on the cot for the night, while his brother got the other bed.  Tomorrow night he should get his turn on the bed.  But for now he just wants to go out and read in peace.  He goes down to the beach, there's no one on duty at the front desk, and not really anyone outside at the little huts on the beach yet.  The first place he chooses soon gets a little busier than he'd like just as everyone starts lining up at the dock to get a ride back so they can catch their planes home, or else just to go to the busier Key West for the day.  He sees a few people, including a girl about his age named Drew.  Drew also is kind of a main character as we get some of the chapters from her viewpoint.  Drew is from England, and is there with her mom and dad as well.  She's not real thrilled to be on this tiny island.  Kind of wants to get to Key West where her friend told her the "party is at."

Davey wanders off to a more secluded beach to read.  There is a sign there that says no swimming.  After a while though, the water looks so nice, that Davey thinks he will just wander in a bit, just wade.  So he hides his book, shoes, and glasses, so that no one would steal them or see them if they came along.  As he wades a bit further, and further, he notices that he's gotten a long way from the beach without realizing it.  When he decides to go back to the beach, he tries walking and swimming back, but only getting pulled further away.  Seems the current has him.  Soon he is so far away he can't even see land anymore.  And without his glasses, he's not really able to see much of anything.  At one point he sees what he thinks is land, and swims toward it.  It turns out to be a plastic water bottle, like you'd see in an office that you put on the stand with a spigot to get drinks from.  He's frustrated at first, but then realizes he can at least use it to help float.  And there he stays, hoping that someone soon will find him.  Of course there are things in the water that notice him there.  Little fish, who nibble on him.  And then larger animals, sharks.  Now he is just waiting to be rescued.

It will take his family almost the whole day, with the help of the hotel's staff, as well as police, and coast guard to get an idea where he is.  Even Drew, who saw him during their morning walk, will come in as a big help.

I like that this story took place over just one day really.  I think it is a very interesting book, and maybe a good read for someone who is a reluctant reader.  Definitely a quick read, and one that I had trouble putting down because I needed to know what would happen with the sharks, and when would his family finally figure out where he had disappeared to.
Posted by Lisa Mandina at 9:00 AM