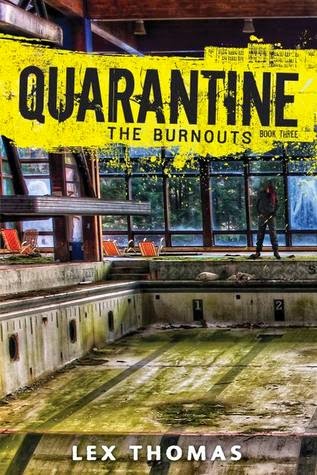 As with the 2nd book, thanks to Egmont and Edelweiss for allowing me to read an e-galley of this.  Although when I thought I had downloaded it, I went to find it on my Nook, and I couldn't.  So I was sad and thinking that maybe it had expired already, or like some other titles, I can't seem to get them to download for some reason.  It's rare.  And when it does happen, I just move on, because it's not as if I don't have many other e-galleys already downloaded to read.  But, for some reason I noticed my Nook was doing a bunch of updating, so I went to my Bluefire Reader App, and searched the title, and I found it!  So now I've been able to read it and finish this series.  If you haven't read book 2, or books 1, you should probably not read much further in case I give away something.

So we ended book 2 with Will graduating and getting out of the high school and all the gangs and violence.  But what also happened is that he saw David, his brother, who Gates and the other Saints had told him was dead.  We learn why people thought he was dead.  And on the outside, David shows Will how he is helping the parents out, as they hang out around the school, protecting it from the adults who want to go in and just kill the rest of the kids to protect themselves.  So Will decides to stay and help, and wait for Lucy to graduate.

Lucy is still stuck inside, but things are not good for her.  When she went after Gates in order to try to protect Will, she made a lot of enemies.  The gang she belonged to, the Sluts, had to jump in when she did this, that's how the gangs work. But because of this, their leader, Violent, was fatally hurt.  And while Violent lasts a few days, and even tells Lucy how much she admires her for what she did, once she dies, the Sluts end up kicking Lucy out.  She's now on her own.  And none of the other gangs will take her in because they all liked Gates.  And some gangs would even kill her if they could.  Then you have Hilary, who is not happy with Lucy for taking her tooth, and being the only one who knows that she is missing a tooth.  Hilary is also getting close to graduation as her nose bleeds and hallucinations start.  She finds a gun, and decides to take back the gangs that once belonged to her, as well as using it to command all the gangs to create a prom for her before she graduates.  Lucy finds some unlikely protection with one of the burnouts, who she knows as Bile.  After all the things she is going through, Lucy even tries out the different drugs the burnouts have figured out how to make in order to keep their highs going.

Once Will finds out something is going on with Lucy, and the trouble she is in, he decides he is going back in to save her.  Even though now that he's graduated the other students would kill him if he didn't wear a gas mask.  So he takes his gas mask and goes.  David has to follow, he refuses to lose his brother again now that they've been reunited.  Once in, it will be a fight to save Lucy, let alone to get back out.  The ending is pretty exciting, is there a cure?  And who will get it, and will it work?  You'll have to read this to find out.

It was really interesting to me to get to learn about other gangs we hadn't really read about in the other books.  To see what was going on from the outside, how the world was doing, and what the parents had to do to protect their children.  We got to really be inside the mind of someone who was on the verge of graduating, Hilary, and see just how it all affected them.  And then the tragedy of who would die, and who would live, and if the students would be able to survive outside the school if ever they needed to get out before they graduated.  A good conclusion.  My only issue is the way it ended.  It kind of seems like we need another book.  I need to know what happens next with the people and situation we're left with.  I saw another person on Goodreads felt this same way.
Posted by Lisa Mandina at 9:00 AM