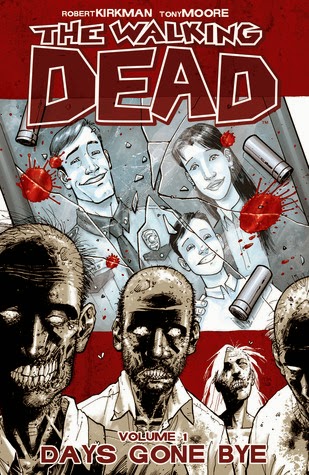 I ordered this book into the high school library where I work because I figured we needed more graphic novels, and surely this would be popular.  Of course we didn't get it until the end of the school year, so I'm hoping to see it get more use next year.  I have watched the show from the very beginning and love it.  And I'm not really much of a comic or graphic novel person.  I mean, I love all the novels that go with Buffy the Vampire Slayer, but wasn't able to keep going with the Season 8 comics.  However, I decided to check The Walking Dead out over the summer and read it for myself.  It was a quick read, and so I asked my friend who owns the first Compendium if I could borrow that next, so I'll be reading that too.

I won't talk a lot about the plot, because if you've seen the show you know it.  But I guess the comics/graphic novels basically follow Rick, the sheriff.  So of course there will be many characters either left out, or changed from the tv show.  As I've been informed, sadly, one of my favorite characters on the show, Daryl, is one not in the book.  But the story is pretty much the same to start.  Rick gets shot, then wakes up in a hospital all alone.  He finds the zombies, but doesn't have any idea what is going on, as he was in a coma for quite a while it seems.  He goes home, and finds his wife and son are gone, but then gets hit on the head.  When he wakes up again, he is with a man and his son, who tell him about what is going on.  Soon he decides he must go find his wife and son.  There are many scenes that are the same from the show.  Rick riding into Atlanta on a horse.  Walking with Glen through Atlanta with zombie body parts draped all over themselves as a disguise to be able to walk through the zombies and get supplies that are needed back in town.  But, and big SPOILER ALERT, Shane, Rick's co-police officer, dies at the end of this.  Whereas in the show he stayed around much longer.  But I'm totally okay with it, as I wasn't a huge fan of Shane.

I can't wait to read on, and see what else is the same and what is different.  From what I've heard, they've stayed a lot closer on plot and such compared to another tv show I like that is based on books, True Blood.  So I'm sure reading on I'll eventually get to where I recognize things that are coming up.  Like people did with the Governor, as well as now with Terminus.

I definitely recommend these graphic novels and will be stocking up on them for my school library, and for the students to enjoy.
Posted by Lisa Mandina at 9:00 AM