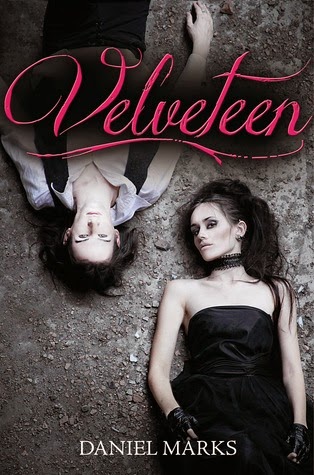 I got an ARC of this book through the YA Book Exchange a while back, and had loaned it to a friend.  I got it back a few months ago, and just got around to reading it this past week.  It was a longer book, over 400 pages, so I took a bit longer reading it.  Plus, I had so many posts already planned, that it wasn't a big deal worrying about what I'd post on my blog.  I'm not sure how much I liked this book.  The rating I gave it on Goodreads was that "it was okay".  I think the story had a lot of potential, and there were some really good parts, but at the end, I was left a little still not sure how I felt about it.

The main character is named Velveteen Monroe.  And while you may think she was named after the story of The Velveteen Rabbit, she was actually named after the fabric in the older movie theaters.  Now there is something unusual about Velveteen, she is dead.  And she is now in Purgatory because she must have some things she needs to complete before she can pass on to Heaven.  She has a job of going out and helping to get souls to come back to Purgatory, ones that have possessed living people, which is against the rules.  She has a crew made of two children, Luisa and Logan, not really children, that's just how old they were when they died, and also a boy named Quentin.  When these dead people from Purgatory go out and possess the living, they cause horrible disasters to occur in Purgatory, called Shadowquakes.  On one such disaster, Velveteen must take her crew out to find the soul causing this, and rescue them, as well as any other souls they may have stolen.  On this trip they pick up a dead soul being stored in a crystal ball, who is a teen named Nick. Nick is described as basically a Abercrombie and Fitch model type of guy.  And while Velveteen is more of a goth girl, there seems to be an attraction between them.  Which Velveteen doesn't want at first.

You see Velveteen was murdered by a serial killer named Bonesaw.  And she has found a secret crack to slip back into the living world, where she has gone and haunted him.  Trying to save other girls from meeting her fate.  Her goal is to one day be able to either make him kill himself while she is possessing him, or at least get him caught and put away so he can't do this to any more girls.  And she's not supposed to do this.  It is said that things like this could be what is causing all the shadowquakes.  When they get Nick back, it seems he will be staying and working with Velveteen and her crew.  And this is hard, because he doesn't seem to want to fight this connection, and it is against the rules for them to have relationships when they work together.  Not only are those things issues, there is a group of rebel souls that want out of Purgatory, and they are taking advantage of these shadowquakes to move their agenda forward.

As you can see there is a lot going on.  I definitely rooted for Velveteen to go back ad take care of her serial killer.  But some of the other stuff was confusing.  They had to take their clothes from Purgatory off when they went through to the living world because they would get shredded on the trip there.  But at first I wasn't sure if they were naked when they got to the world or what. Not sure how much it was actually made clear as I read.  I liked the little back story behind the bad guy who was in charge of the rebels.  But I still wasn't quite clear on exactly what they wanted to do.  Yeah, they wanted out, but to possess people?  That is mostly made clear at the end, even if it is still a bit unclear to me why they do it the way they do it.  And I feel like there needs to be a sequel.  I can't quite tell if the book ended and all this would be no problem anymore because of what was done or not.  So let's say it had good parts, but maybe had too many details that I felt were just left open or hanging with no resolution.  I don't see anywhere on  Goodreads about a sequel, but I feel like a sequel might help me be more satisfied with this story.
Posted by Lisa Mandina at 9:00 AM