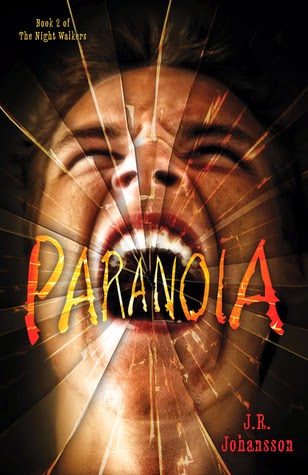 Thanks to Flux Books and Netgalley for allowing me to read an e-galley of this book.  I thought it had never downloaded, but then I had an update on my Nook and it showed up again!  So I was very glad to get a chance to read the sequel to Insomnia, a book that I really enjoyed.  Now I am really big on following authors on Facebook and Twitter.  And so I saw that the author was going to be at BEA the last day.  Unfortunately, if you saw my post about that last day, I was unable to find her and meet her.  One day though I hope to!  So, if you haven't read the first one, you might not want to read much further.

We're back in Parker's life.  And he seems to be able to control his dream watching, or maybe at least able to deal with it better.  When his friends that usually help him go out of town, he hopes to just go into his mom's dreams every night, to save himself from anything else.  One night he decides he needs something different, and he ends up at the movie theater, planning to look in the eyes of a girl who he thinks will have pretty tame dreams.  Outside he gets attacked by one of Jeff's friends.  Jeff is the guy that was actually doing the stalking in the first book, that died in the fire.  And at first his last eye match is Thor, the friend.  But a guy pulls Thor off of Parker, and then his eyes are the last ones Parker looks into.  At first it seems to be okay.  But then Parker goes into a black space.  When he wakes up he is in jail.  He is bailed out by Jack.  The mysterious guy in the last book who seemed to know what Parker was going through.  And now who seems to know Parker's dad.  He teams up with Jack to try to figure out not only how to control this evil or bad side of himself that is taking over, but also to help find and save his dad from people called Takers.  These Takers are not only going after Watchers like Parker, but they seem to be behind other mysterious disappearances and strange happenings in the town.

This was a very good sequel.  We learn some things about Parker's dad, and we also learn that there are so many things Parker should have been able to do the whole time, that would have made his life so much easier.  There is another kind of person, one that can't go into others dreams, but is good for Watchers, they can help them get the sleep and rest that they need to live and be healthy.  And the one in Parker's life isn't who you would expect.  I liked all the background, I kind of guessed the little secret about Jack a bit before it was revealed.  I like when I can do that.  We also learn that things that happened in the first book weren't all as they seemed.  And maybe some of the guilty parties may not have been working on their own in the way that it was thought.
Posted by Lisa Mandina at 9:00 AM