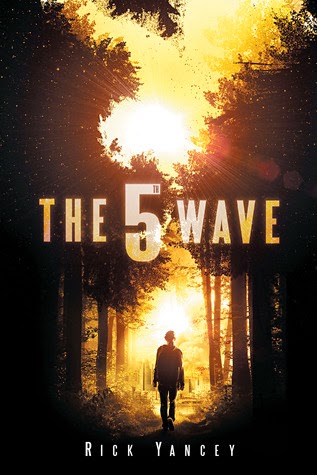 I won a copy of this as an e-book a few months ago.  I decided I needed to read it, finally.  And it was definitely a good book!  Now I am very eager for part two.  I like how it took into consideration all the past books/movie theories about what aliens would do when they came.  I did have one little issue, and maybe it's because I read too fast and missed something, but I'll talk about that at the end o my review.

So as you probably know, this is about an alien spaceship coming to Earth.  And the waves have to do with how they attack humans.  The first wave is an EMP, basically shutting down all electricity.  The second wave was something striking one of the tectonic plates and causing huge tidal waves that killed people on the coasts of all continents.  The third wave was disease.  And the 4th wave was the silencers.  I won't go into a lot of detail about the 4th wave really.  It is basically what it sounds like.

The main character is Cassie, who as we start with her, she takes us back through all the waves, to where we know that she feels she is the last human on Earth, mainly because she hasn't seen anyone else.  But, the last thing she remembers is her brother being taken to a camp supposedly to save all the children.  And while the soldiers told those kids on the bus that they would be going back for their parents and other family members, once the buses were out of sight, the soldiers killed everyone.  Cassie was able to escape, even after seeing her father killed.  Eventually she decides to keep her promise to her brother and go find him.

But Cassie isn't our only main character it turns out.  One of the silencers gets a bit of a voice after he runs into Cassie, and shoots her.  You see, he isn't human, at least not completely, he has an alien inside him.  And even though he did shoot Cassie, he can't kill or silence her, as he is supposed to.  He has been following her for awhile, and has read her diary when she is sleeping, and he thinks he has fallen in love with her.

There is also a boy, who is called Zombie by the soldiers training him to fight the aliens.  Although his name before was Ben Parrish.  Which will sound familiar from things Cassie has said.  He has learned from the soldiers at the base where he is that there is a way to tell who are the aliens in human bodies, and who are regular humans.  And so he is learning to fight in order to help defeat them.  They are using technology somehow stolen from the aliens to determine who is who.  Zombie/Ben wants to avenge his family, especially his younger sister who he had promised to protect, and at the end he feels he didn't do all that he was able.  Cassie's brother Sam is soon brought here.  And Ben feels he has his chance to kind of make up for his sister by helping this young boy, about his sister's age.  Sam is called Nugget.  Everyone here gets a new name.

After Cassie gets shot, she tries to crawl away, to still go after her brother.  But of course she doesn't make it far before she passes out.  When she comes to she is in a bedroom inside a house, and her wounds have been dressed and she has been cleaned up.  There is a farm boy who is helping her.  His name is Evan.  He is very handsome, but Cassie just feels like there is something off about him.  Of course that could just be because of the main rule she has since all of this, trust no one.  As much as he proclaims that his new thing in life, something to keep him going, is helping her, she just isn't sure if she can trust him.

All these characters will have to interconnect, and they do, at the end, in a very spectacular battle.  Some will be betrayed by who they learn is really an alien, and some of those aliens may actually be on our side, not agreeing with what is being done.  In the end they come together in a definitely real way.  And now they must make the decision on what they will do next.

A great story, hard to put down, so interesting, I could have just sat and read in one sitting if I'd had the time/energy.  The one thing I wonder about though, is exactly what the aliens need the planet for.  When you find out what form they take, I don't understand why they would need to kill all the humans.  If they are like we would be as we are now if we went to take over a planet, it would make sense. But I'm not quite sure I get it, other than to give the story great suspense and reason for it to be the way it is.  I know that's vague, but I don't want to give too much away.  If you haven't picked this up yet, you definitely should.
Posted by Lisa Mandina at 12:18 PM