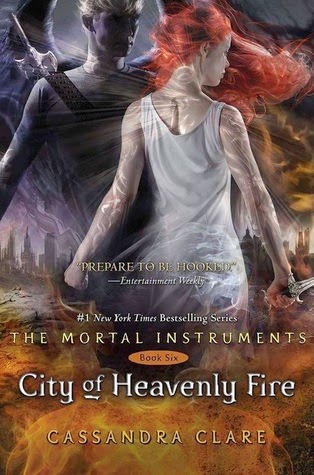 Wow is what I have to say after finishing this book.  Still very pleased that I am able to check books out from the bookstore where I work, since I can't afford this one at the moment.  And since I own all the others in paperback, I kind of want to wait and get this one that way. Although I had to take the jacket off in order to check it out, and it does have a pretty cool picture on the inside of the jacket, making me almost want to go ahead and spend the extra money for the hardback.  But I kind of want to tell all authors that this is how you end a series. I want so bad to name a specific author that I'm thinking about, but I feel that the author I'm thinking about, well, her series was dystopian, so not necessarily going to be a happy ending.  Whereas even with heartbreak in a book like this, there is always magic around to save the day for some things and some people.  If you aren't this far in the series, there will of course be some spoilers in this.  Just can't help it!

So when we left book 5, which I reviewed HERE, Jace was finally separated from Sebastian in a way that didn't kill him.  But, he also now had the fire of heaven inside him.  And he had to learn how to control it in order to not kill or hurt people.  Sebastian had disappeared, but not without leaving his warning that he would be back.  And not without having a horrible plan to turn all the Shadowhunters into his own evil army.  The people changed are called the Endarkened.  And it seems that once they are changed it is final.  There is no way to change them back.  Of course Sebastian wants his sister Clary to come and rule by his side.  It seems to be all he has ever wanted.  He hates their mother, Jocelyn.  He will even let Jace live because that is what Clary wants.  But while he sets out by attacking almost all the Institutes around the world, either killing or changing the Shadowhunters at each one, he seems to be completely off the radar when it comes to trying to find him.  And we find out that there is one group of the Downworlders that have decided to ally themselves with Sebastian.  Because they have had a long history of not wanting to be a part of the Clave and the Accords for all that have been harsh to their people.

Magnus is feeling the absence of Alec so much that he feels he might want to get back with him, but Alec is still unsure if it can ever work if Magnus refuses to share his past with him.  Everyone keeps telling Simon that he needs to DTR - Define the relationship, with Isabelle.  And Jace and Clary, well the two of them have never been closer, except for the heavenly fire inside Jace that keeps them somewhat cautious and apart until he can learn to control it.  As you would expect, all will have to come to head with a battle of some sort, and there are two big ones in this book.  And the final one will take place in a demon realm.  One that it seems Magnus has a bit of a connection to.  We also learn that this other realm had its own Jonathan Shadowhunter and Nephilim, and it seems as if they didn't make it with fighting off the demons, which is why it is now a demon realm.  And Sebastian hopes to make it his kingdom to rule, with Clary.  Our 5 main characters from the beginning:  Clary, Simon, Jace, Alec, and Isabelle, must try to rescue some very important people:  Jocelyn, Luke, Magnus, and Raphael, as well as try to save the world they know.  And so the series kind of ends up back where it started in that way.  Of course someone will have to sacrifice something to save them all.  Will it be Clary who will give her world up to save it, as well as the people she loves, by taking the throne beside her brother Sebastian?  Will it be Magnus calling on his demon father for help, but having a price to pay?  You will have to read to find out.

One other important storyline.  We have some kind of new characters, if not introduced exactly for the first time, we get to know them better this time, as it is their Institute in Los Angeles that we begin the story with.  With Sebastian coming in and killing or turning all but a group of children, who are able to escape to Idris.  And it will be those children, Emma Carstairs, and the Blackthorns:  Julian, Tavvy, Livvy, Ty, and Dru, who will be the next chapter in this series when The Dark Artifices series begins fall of 2015.

Again, just love, love, LOVED the way this one ended.  I closed the book with a smile on my face, satisfied, yet still wanting more with these characters that I'd grown to love.
Posted by Lisa Mandina at 1:51 PM