Review: Welcome to the Dark House by Laurie Faria Stolarz 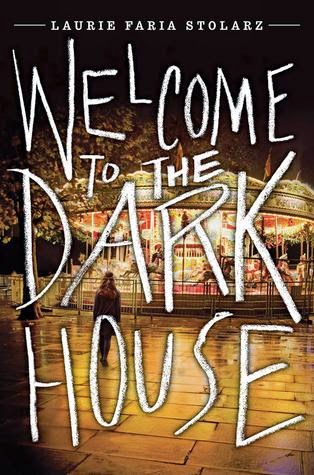 First, thanks to Netgalley and Disney-Hyperion for allowing me to read an e-galley of this title.  I've only read one other title by this author, Deadly Little Secret, and I really enjoyed that one (which reminds me I need to finish that series!).  So when I saw this available, and read the synopsis, I was really excited to read it.  For the most part I was pretty satisfied and enjoyed this book.  I had one or two issues, but they weren't anything big enough to make it not a good read.

The story is about 7 people teens, who have entered a contest to share their worst nightmare, and then go be part of a show with a popular horror director and have him help them "face" their nightmares.  Maybe even helping them to get over it.  First is Ivy, who has a nightmare based on a real event in her life, her parents' murder.  She even came almost face to face with their killer, who only left her alive because they could hear the sirens of emergency vehicles arriving thanks to her 911 call.  Compared to her nightmare, you have the fake dream of Parker, who wants to be a film maker, and so he makes up a dream that he thinks will help him win the spot to get to meet a great director.  The others all seem to have real nightmares though, Shayla, who found her best friend dead after committing suicide.  Natalie, who had a twin brother that was born dead.  And ever since then she's been obsessed that he is still around, and her parents have treated her horribly, of course we don't know how much of that was based on how she was already.  But she mutilates herself, by pulling her hair out, as well as getting tattoos of things from these horror movies.  And then there is Frankie, who had his nightmares start with the death of his uncle, right about the same time his mother left him and his father.  The name that is immediately one to laugh at, Garth Vader.  His father called him a baby for having nightmares and being scared of horror movies, since his father was such a huge fan.  For Garth, it became a love of his, all the horror movies, just something he did to overcome his fears.  And finally there is Taylor.  Although she is gone from the house as soon as the others start showing up.  So we really don't get to know much about her, other than we do get her nightmare at the end of the book.  And it has something to do with her taking off on a hike in the woods, kind of.

The bed and breakfast they are all staying at is designed just like the house in one of the horror movies, and there are characters and other things plucked from the scenes.  For most of them, it is easy to point out. For Ivy who is only there to try to rid herself of her nightmares, most of it is new, as she's never watched those movies.  They will all end up at a place where they must each go in and face their nightmares, and then be part of the next movie, as well as getting to meet the director.  But if they go in to anyone else's nightmare, they will be cut from the movie.  One of them will find that out the hard way.  And as their nightmares seem to be coming true, and in deadly ways, it seems that maybe this isn't actually done by the famous director.  This movie is actually going to be filmed with what happens to them.  Who will survive, and who will succumb to their nightmare?

Really, I love the idea of this, and I can totally see it as a movie, or maybe a tv show where they could do a different group of people each season?  My biggest complaint is probably with the formatting of the Kindle copy I downloaded from Netgalley.  It was hard to tell when a new person was narrating.  Because other than Taylor, we do get to see this through each person's view at some point in the story.  The narrator's voices were different enough once you got a few lines in, but it would have been nice to have something else to point out it was changing.  Otherwise it was a bit confusing until you got that identifier.  I'll be interested to look at a finished copy and see if they do differentiate in some way.  And I do agree with one point that I saw another reviewer make on Goodreads.  What about Taylor?  I'd like to know more about what happened to her.  Maybe they found her somewhere when they were facing their own nightmares?  I don't know.  But I did read that there is going to be a 2nd book, so maybe it will be in that one?  When I said I could see this as a movie, I almost feel this story might lend itself better to something more visual like that.  I think that all the ideas were really good, and the description of things was also great, but I'd love to actually see it somewhere besides in my head.

A fun, easy (depending on formatting) horror story read.  Anyone looking for anything "deeper" should consider that it is about a B movie type of horror film maker, so the way it was told was really just about perfect!!!  It fit that format perfectly.
Posted by Lisa Mandina at 11:54 AM