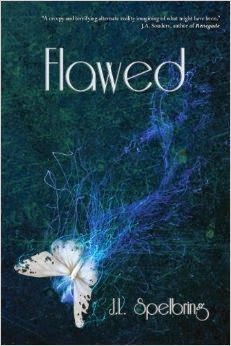 Once again thanks to both Spencer Hill Press and Netgalley for allowing me to read an e-galley of this book.  And it was good to read it almost right after I finished the first one, Perfection, which I reviewed HERE.  And I don't know if it was because I had just finished the first one and was getting to read right on, but I think this one was better than the first one.  I mean I liked it better, not that I didn't like the first one though.  So, here's the best summary I can give without too many spoilers for those who haven't read the first book.

Our main character is again Ellyssa.  She was able to save Rein with the help of his brother Woody.  Unfortunately when they get back to the cave in Missouri the rest of their Renegade family called home, they find they have been discovered.  There is a massacre in one of the rooms in the cavern.  The only thing that gives them hope is that there aren't as many bodies as there should be.  While they are trying to get their bearings and figure out where to go looking, one of their family shows up, Trista.  At first they're unsure whether to trust her or not as she is wearing a Gestapo uniform.  Ellyssa is unsure if she has betrayed them or is planning to.  But it turns out Trista was saved by the cop from the last story, Dyllon, the one the crazy Gestapo lady after Ellyssa had almost fallen for.  Rein is immediately ready to kill Dyllon when he sees him, remembering how Dyllon had stood by while Ellyssa's sister Aalexis had tortured him.  But Trista is able to convince them to give him a chance, along with help from Ellyssa who is able to read his mind and see whether he plans to betray them.  They are taken to the house of one of the supporters we met in the last book. They stay there while they try to figure out where the other survivors from their Renegade family have been taken.

Ellyssa was sure that when they blew up The Center in their escape at the end of the first book, that all of her siblings were dead.  But she is wrong.  Aalexis and Xaver survived.  And the lat thing Dr. Hirch, der Vater as they call him, told Xaver, was to protect Aalexis at all costs.  With her being able to control things with her mind like she can, she is the most important of all the children the doctor created.  Aalexis wants to continue her father's work, but she also wants revenge on Ellyssa for killing him.  But she can't just kill her, because they need her DNA as part of the next set of children, the more perfect children with all of their abilities.  As Xaver and Aalexis mature, they begin to undergo some of the same issues with emotions that Ellyssa had experienced, something that they had always been told was weakness.  But Xaver convinces Aalexis that their father was imperfect, so he must be wrong about this.  He used the example of how far Ellyssa would go to save this imperfect boy she was in love with, Rein.

The survivors are in a concentration camp. Sent there on purpose, and Aalexis is going to use them as bait to try to get Ellyssa where she wants her, and to get her revenge.  There will be betrayal, and lots of hard traveling and planning to try to save their family.  And we will even see her friend Mathew, the Renegades' doctor in the first book, deal with Aalexis and other Nazi's at the concentration camp in his own bid to survive and save his family.  It all ends up at the camp, with a conclusion that doesn't quite end it.  It leaves us open and ready for the next book.

Since other characters from the first book that we got to read from their point of view are dead in this book, we get some new ones besides Ellyssa.  We get to go into the insane mind of Aalexis, and see how she reacts to all of this, and how she schemes to complete her father's plans.  And as I said, we also get into Mathew's mind as he tries to make it in the concentration camp.

I feel like we got more background and details on the outside world, as well as some of the history between the World War II and the current time, since Hitler won the war.  December 7th is Ellyssa, Aalexis, and Xaver, as well as the other children who are no longer alive's birthday.  In honor of the day of the Pearl Harbor attack.  According to this alternate reality, that is when the war turned in Hitler's favor.  I found that interesting, and hope to hear even more about that in the next book.  Which I will be waiting on impatiently, as well as keeping my eye open for when an e-galley of it might be available.  The title of the first book, Perfection, fit well as we learned about the perfect children like Ellyssa and her siblings, and the doctor's goal to truly create a perfect race, even at destroying many of those who were currently close to the ideal, but not truly there.  And the title of this, Flawed, fit this as well.  Aalexis and her brother becoming "flawed" as they began to feel more and more emotions, which was totally not part of the goal their father had.
Posted by Lisa Mandina at 9:00 AM