Dianne K. Salerni is an elementary school teacher living in Chester County, Pennsylvania with her husband and two daughters.


Dianne's first novel, We Hear the Dead (Sourcebooks 2010), recounts the true story of Maggie Fox, a teenaged girl credited with the invention of the séance in 1848. A short film based on We Hear the Dead and titled The Spirit Game premiered at the 2013 Cannes Film Festival.


Her second novel, The Caged Graves (Clarion/HMH 2013), is inspired by a real historical mystery in the mountains of Pennsylvania and was named a Junior Library Guild Selection and a Best YA Historical Novel for 2013 by BookPage.


The Eighth Day, the first book of a middle grade fantasy series about a secret day of the week, is due to be released by HarperCollins in April, 2014.


Dianne received her Bachelor's Degree in Elementary Education from the University of Delaware. She subsequently earned a Master's in Language Arts Education at the University of Pennsylvania before taking a job teaching in the Avon Grove School District. She has now been teaching fourth and fifth grade at Avon Grove for over 20 years. 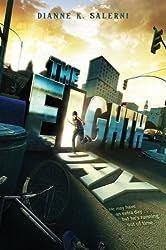 In this riveting fantasy adventure, thirteen-year-old Jax Aubrey discovers a secret eighth day with roots tracing back to Arthurian legend. Fans of Percy Jackson will devour this first book in a new series that combines exciting magic and pulse-pounding suspense.
When Jax wakes up to a world without any people in it, he assumes it's the zombie apocalypse. But when he runs into his eighteen-year-old guardian, Riley Pendare, he learns that he's really in the eighth day—an extra day sandwiched between Wednesday and Thursday. Some people—like Jax and Riley—are Transitioners, able to live in all eight days, while others, including Evangeline, the elusive teenage girl who's been hiding in the house next door, exist only on this special day.


And there's a reason Evangeline's hiding. She is a descendant of the powerful wizard Merlin, and there is a group of people who wish to use her in order to destroy the normal seven-day world and all who live in it. Torn between protecting his new friend and saving the entire human race from complete destruction, Jax is faced with an impossible choice. Even with an eighth day, time is running out.

Stay tuned for The Inquisitor's Mark, the spellbinding second novel in the Eighth Day series.

From the Back Cover:

When newly orphaned Jax Aubrey awakes to a world without people the day after his thirteenth birthday, he thinks it's the apocalypse. But then the next day is a regular old Thursday. Has Jax gone crazy? What's going on?
Riley Pendare, Jax's sort of clueless eighteen-year-old guardian, breaks the news: Jax just experienced the Eighth Day, an extra twenty-four-hour period between Wednesday and Thursday. Some people, like Jax and Riley, have the ability to live in all eight days. But others, like Evangeline, the teenage girl who's been hiding in the house next door for years, exist only on this special day.
At first it's awesome to have a secret day. But as Jax gets to know the very guarded Evangeline, he discovers that she is the sought-after key to an ancient spell rooted in Arthurian legend. And Riley—who forgets to pay bills and buy groceries!—is sworn to keep her safe from those who want to use her to eliminate the seven-day world and all who live there.
Jax tries to protect Evangeline, but with his new friend's life on the line, as well as the threat of human destruction, he is faced with an impossible choice: trigger a real apocalypse or sacrifice Evangeline.
With a whole extra day to figure things out, it couldn't be too hard . . . right?
Other books by this author buy links:

Author Bio:
Maureen decided she wanted to be a writer when she was six. If that failed she wanted to be a detective. Poetry was her doorway into fiction writing.
Fiction includes: The Peculiars (Abrams/Amulet 2012) A YASLA and Bank Street best book, and the Time Out of Time duet: Beyond the Door, May (Abrams 2014) and The Stone of Destiny. 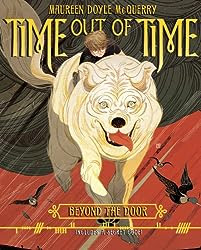 With his love of learning and the game of Scrabble, Timothy James feels like the only person who understands him is his older sister, Sarah, and he’s fairly certain nothing interesting will ever happen to him. But one night, while his parents and sister are away, the door opens, and mythical creatures appear in his own living room! Soon, a mystery of unparalleled proportions begins to unfold, revealing an age-old battle of Light against Dark, and Timothy must embark on a quest to prevent the Dark from controlling the future and changing the past. But he can’t complete the quest alone. Timothy has to team up with his sister and the school bully, Jessica, to face an ancient evil, and in the process, this unlikely trio discover they are each more than meets the eye.  Other Books by this author:

Amy Talkington is an award-winning screenwriter and director living in Los Angeles. Before all that she wrote about music for magazines like Spin, Ray Gun, Interview, and Seventeen (mostly just as a way to get to hang out with rock stars). As a teenager in Dallas, Texas, Amy painted lots of angsty self-portraits, listened to The Velvet Underground and was difficult enough that her parents finally let her go to boarding school on the East Coast. Liv, Forever is her first novel. 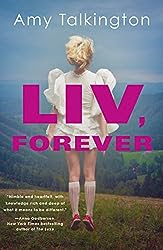 When Liv Bloom lands an art scholarship at Wickham Hall, it’s her ticket out of the foster system. Liv isn’t sure what to make of the school’s weird traditions and rituals, but she couldn’t be happier. For the first time ever, she has her own studio, her own supply of paints. Everything she could want.

Then she meets Malcolm Astor, a legacy student, a fellow artist, and the one person who’s ever been able to melt her defenses. Liv’s only friend at Wickham, fellow scholarship kid Gabe Nichols, warns her not to get involved, but life is finally going Liv’s way, and all she wants to do is enjoy the ride.


But Liv’s bliss is doomed. Weeks after arriving, she is viciously murdered and, in death, she discovers that she’s the latest victim of a dark conspiracy that has claimed many lives. Cursed with the ability to see the many ghosts on Wickham’s campus, Gabe is now Liv’s only link to the world of the living. To Malcolm.

Together, Liv, Gabe, and Malcolm fight to expose the terrible truth that haunts the halls of Wickham. But Liv must fight alone to come to grips with the ultimate star-crossed love.

You can see my review of Liv, Forever HERE.