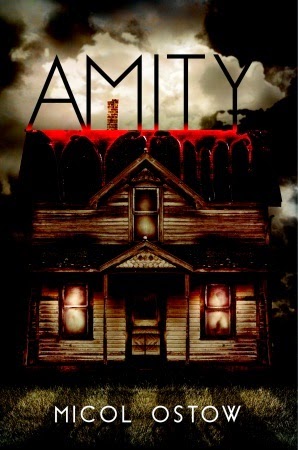 Thank you to Egmont USA and Netgalley for allowing me to read an e-galley of this title.  Unfortunately, while it had some definitely scary parts to it, very horror movie like,  I wasn't necessarily as thrilled with it as I had hoped to be.  You see, I recently looked into the whole Amityville Horror stories, more about this after my summary.

This story takes place in two different time periods, with two different families.  It starts out even with a letter from the oldest son of the first family, one he's writing to his twin sister.  His name is Connor, and his sister's name is Julianna, or as her father calls her, Annie, but she prefers to be called Jules.  Their father is abusive, at least he is to their mother, as well as their younger brother Abel.  Connor seems to take after his father with the anger issues.  And it is possible that is what saves him and his twin sister from their father.  They have moved to Amity because of issues his father has had with money it seems.  Moving out there is not what the twins really want to do, but it is better not to complain in front of their father.  Because complaining will lead to someone getting hit, their mother or their younger brother.  But moving there, something changes about Connor.  The house seems to be calling to his "bad" side.  Even causing him to get mad at his twin, something he's never really felt about her.

The 2nd family moves in 10 years later.  There are two kids in this family, a brother and his younger sister.  Luke and Gwen's family have moved there for some family reasons as well.  It seems Gwen has had mental problems, that have caused her to even be in an institution for a while.  And the family felt it would be better for her to have a new start.  Gwen is saying and trying to act like she is better.  But she still sees and feels things like before.  Her Aunt Ro is the only one who really understands her, but her parents don't really appreciate what her aunt seems to condone.  Gwen feels the house is talking to her.  But it's not just her.  Her older brother Luke seems to be affected as well.  He gets really kind of spaced out, and abrupt.  Very similar to Connor, ten years before.  And things seem to be happening all over again.  Gwen sees a ghost, of a girl named Annie, who seems to want to help her.

We go back and forth in time, the viewpoints of Connor and Gwen are how we get the story.  There are some great scenes that I could totally see in a horror movie, and so in that way it is a very scary book.  And if you don't know a lot about the actual Amityville Horror reality and background, and this sounds good to you, you can probably stop with my review right here, and go enjoy a good scary book.  Otherwise, if you want to read what my problems with the book/story are, you can go on.  But don't let it keep you from reading, like I said, it is a good scary story.

When I mentioned in the first paragraph about how I'd recently looked into the whole background of the real place called Amity, it was mainly because of Lorraine Warren, and her involvement in the original "haunting." I had read the original Amityville Horror book years ago before I looked into this, as well as watching the movie.  But now I know that many people say it was all a hoax because of those involved who have come back and said they lied.  Now it's not that issue that bothers me, it is the things that have been proven to not be true.  Such as the land being a Native American burial ground.  Or that a famous man, thought to possibly be a witch during the Salem Witch Trials lived there.  And the other thing, that it was a insane asylum at one time.  All these things were used in the story as possibilities of what the reasons were for all the hauntings or mysterious events that happened there.  I'm not saying that using one of them would have been that bad or bothered me too much. Just that the author pulled in all three misleading ideas, seemed a bit of a cop-out to me.  But as I said, if you didn't know all those things, then you would enjoy it because those things are very eerie and make for a good back story.  Sorry, I guess I may have just ruined that for some people.
Posted by Lisa Mandina at 9:00 AM