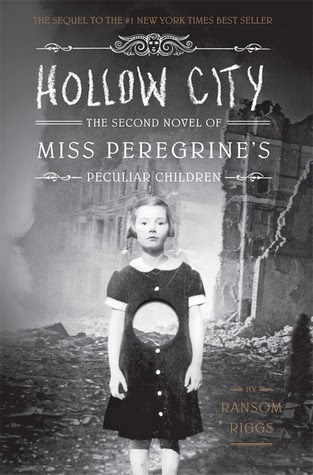 I was lucky enough to get to see Ransom Riggs back in January, when he was here with Rainy Day Books.  It was very interesting to hear him talk about how he started collecting the old photographs that he used for these books.  Enough that when I went to a flea market/antique store a few months ago I actually ended up buying old pictures, thinking maybe I could try to do a story like that myself.  I don't know that I will.  Maybe I should just send the ones I found to him and let him see if he can do anything with them.  That is where I actually got this book, got it autographed, but not personalized.  And then I took it in and donated it to the high school library where I work.  I just didn't know when I'd get around to reading it, even though I did enjoy the first one for the most part.  But, it just wasn't the kind of story that sucked me in right away, so it was harder to pick up and read.  Once I did, it still took a bit to remember bits of it, but eventually I got back into the story where it was at, and was able to read it quickly at that point.  There will be just a few spoilers in this review since it is a sequel but only if you haven't read the first one yet.

Jacob is our main character.  And he was from the present day.  But stumbled into what is called a "loop" which is kind of a time loop, that was used by children that were called peculiar.  The one that was near where his grandfather lived, and when he did that, he ended up getting involved with the group of children that were with Miss Peregrine.  And they are now being hunted by another form of peculiars, called wights.  These wights have captured all the other headmistresses like Miss Peregrine. They were even able to get her, until Jacob and his friends got her back.  But now they can't seem to get her to turn back from a bird. So they journey to London to try to get help.  They must deal not only with the dangerous wights, but also monsters called hollows, and other people that might be out to get them, as well as World War II that is going on at the time.

As with the first book there are photographs worked in.  This time there are many that aren't as peculiar as the last book, but they fit in mostly with the story.  And we are left at the end hanging a bit, so that now I'm ready to read on in the next book.  Which I have no idea when it will come out.  One really cool thing though, is that supposedly Tim Burton might be making a movie of the first book, according to the author when I saw him in January.  I can think of no one else that would be as perfect to do this.  So I recommend this to those who read the first book and were intrigued with the characters and keeping up with their adventures.