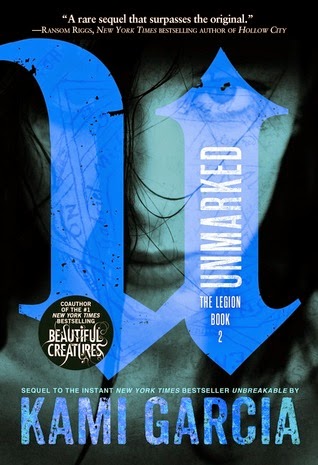 First, thanks to Little Brown Books for Young Readers and Netgalley for allowing me to read this.  It showed up on the site right about the time it was going to be published.   So it is already out, I didn't really get it in time to read it before.  But that's okay, I really enjoyed it!  I finally read the first book, Unbreakable this summer when I checked it out from my school library where I work.  Of course if you haven't read the first book, I can't help but there will be spoilers from that one.  Just know that this is a great solo series by one of the author of the Beautiful Creatures series.

When we left off at the end of the 1st book, the 5 people making up the Legion, Alara, Jared and Lukas, Priest, and Kennedy have just accidentally set the demon Andras free.  They didn't know that the Shift they were putting together wasn't a way to get rid of him, but to release him.  And actually, Kennedy still isn't a member of the Legion.  So the group figures out there must still be someone else.  That her mother hadn't actually been the person in the Legion.  They kind of assume maybe it was her father, who she hasn't seen since he left.  But soon they figure out that it must be his sister, Faith, and they set out to find her.  Finding her leads to a confrontation with the Illuminati.  Or as we learn, a small rebel group of the Illuminati.  And while the Legion and the Illuminati have never been "friends" or even on cooperating terms, in this case, it is the two Illuminati members, Gabriel and Dmitri who show up and actually kind of save the Legion from the demon.  Or they do, until the unthinkable happens.  The demon jumps into Jared.  Now the group must find a way to get Andras out of Jared without killing him.  But the longer the demon is inside, the more powerful he gets.  And the demon is already pretty powerful from the souls of the girls he's been taking and killing.  The girls who all look similar to Kennedy.

We learn a lot more about Kennedy's family, and how the Illuminati has been a part of her life just as much as the Legion.  Priest and Alara will find out Jared's secret about the list he made of the members.  And Andras isn't the only demon, he is able to summon at least one more, in his quest to start open the gates of hell and take over the world.  Kennedy's best friend Elle is along for the ride this time, as she is the one who helped the others to find the private school where Kennedy had been sent by her mother's remaining family after she'd shown up at the hospital with her injuries, and had been suspected of running away.

Once I had time to sit and read more than 30 minutes one day, I was sucked in, and it was really hard to put down.  I love all the back story that we're getting.  The information about the Illuminati is fun to think about if they were really that way.  It's fun to read this again as a fan of Supernatural and think of all the things that tie together for the paranormal aspects.  Another great read, but with another ending that leaves me impatiently awaiting the next book.  Especially since there is no information on Goodreads about it yet, since this one just came out.
Posted by Lisa Mandina at 9:36 PM