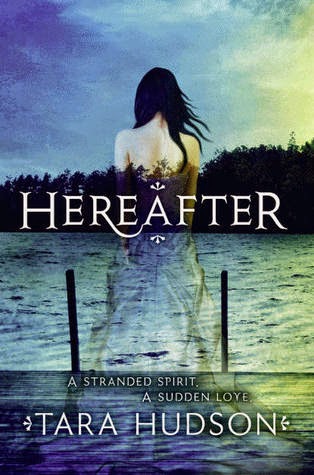 I was lucky enough to get to meet this author and get her autograph on this book at the 2013 Romantic Times Convention in Kansas City.  I guess I didn't have my picture taken with her unfortunately.  I did enjoy the book, although it didn't blow me away.  It was good enough that I will read on at some point, when I have time.

Amelia is the main character, and she is a ghost.  At her birthday party years ago, she fell off the bridge somehow and drowned.  Since then she's not been able to communicate with anyone, although there is this one handsome, yet probably evil boy that she sees around.  And at the beginning, she tries to save a boy that goes into the water in his car.  She's able to save him, probably because he does die, but then comes back to life.  And when he dies, he sees her.  And from then on he can see her.  Something strange happens, he can see her, and hear her, and they can even touch each other.  But it seems his family, well especially his grandmother, are Seers.  And they feel their job is to get rid of all spirits, as they think anyone left after death must be evil.  So even though Joshua really seems to like and trust Amelia, they must sneak around his grandmother who with her friends, is trying to exorcise her.  But that's not the only problem.  The handsome, but evil boy, Eli, wants Amelia to be his assistant.  To help him gather the ghosts of people who die to serve some other evil entities.

Joshua will help Amelia to see when she died, and help her find her family.  Eli will show her the haunting events that led up to her death, and that he had a part in it.  In the end she must figure out if it is worth going with Eli to save Joshua from him and to get away from his grandmother, or if what she has with Joshua could be real, enough to be worth trying for.

A good romance, and an interesting look at the after life.  I'll be interested to see where the author takes the story next.  I know many of you have probably already read the whole series, but I'm just getting around to it.
Posted by Lisa Mandina at 8:00 AM