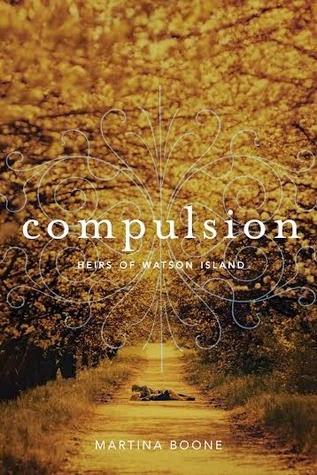 This is one of the awesome ARCs I got at BEA this past summer, and I also got to meet the author, I'll share that picture at the end!  I have to say this was another story I really enjoyed. And honestly, it was a different story than most of them these days.  While some might say there was a bit of "insta-love,"  I think it was definitely explained in a way that totally made it NOT "insta-love."  I"m very ready for the story to go on, but as it says at the end of the ARC, I'll have to wait till next Fall.

The main character is Barrie Watson.  And she is about to find out that her family is one of three families part of some ancient legacies/curses.  Her mother has just passed away, and her godfather, Mark, has found out that he is also dying of cancer.  So Barrie is moving back to live with an aunt she's never met, that she never even knew she had, so that Mark can go live in a home to be taken care of.  Things get weird right away.  Her aunt never shows up to pick her up from the airport. So Barrie takes a cab.  She gets to this mansion, old and kind of run-down, and sees her aunt sitting on the front step.  It seems her aunt sat down and lost all track of time.  It seems her aunt might be a bit on the weird side.  But the house seems to be as well.  Then two members of one of the other two families stop by, and they go by Seven and Eight.  Eight is Barrie's age, and of course very handsome.  He seems to know all the right things to say.  And it seems there may be something between Seven and Barri's aunt Pru. Barrie also finds out that the third family is the one that her father was from, and she has cousins.  So of course, after growing up with her mother and leading a very sheltered life of no family, she is now adamant about meeting them.  Eight agrees to take her, but everyone warns her that it won't be a good thing.   You see the third family's legacy is more of a curse.  In fact the whole town looks down on their family.  But at first, her cousin Cassie just seems like someone Barrie is so glad to have for a friend.

She will soon find out that Cassie wants something from her.  She wants to use Barrie's family legacy.  They are able to find lost things.  In fact when Barrie walks into a room she immediately will be drawn to things that have been lost, jewelry, letters, you name it.  Cassie wants Barrie to find the treasure that her ancestors supposedly buried on their beach.  You see all three of the families' ancestors were pirates, or privateers if you want to be nicer about it.  There is a legend about the Native Americans in the town that Barrie will see come to life every night.  While she has the legacy of finding things, and Cassie's family is cursed, Eight's family has a legacy as well.  These legacies have become things they really feel the have to give into.  Or compulsions.  It gets so bad that when Barrie tries to leave the house she gets headaches.  And while Cassie seems to be nice even though she wants something from Barrie, her father, Barrie's uncle, Wyatt, wants something as well.  And he is a drunk, violent man, as well as a drug runner.

There are many things in the house pulling at Barrie to find them, as well as in the forest that her aunt has forbid her to go into.  Barrie will find things that will clear up old mysteries in her family, some good, some bad, some dangerous.  And she will fall in love, while also losing people she loves.

Such a good story!  Even after I finished reading it, there would be times when my mind would kind of go back and think about the story, and want to know more, as well as even telling other people about it and comparing it to other stories.  Definitely a great read, and like I said, I can't wait to read the next one!  While it didn't end on a cliffhanger, there is definitely more for us to know with this story.