Review: Made For You by Melissa Marr 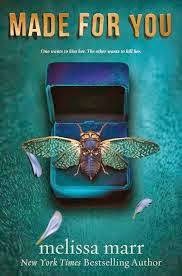 I had to read this book once my order from Amazon came in, well as soon as I had finished the last e-galley I read.  And I must say that I wasn't disappointed at all.  I will admit at first I was a bit worried, as the main character was a girl who was popular and pretty but complaining about all that and not wanting it.  But you do learn throughout the book that while she was those things, the popularity had a lot to do with who her family was, and it may not have been something she really wanted, so you are okay with it.  Or maybe I should say I was better with it.

The main character is Eva.  She is popular, because her parents are descended from the families that own a lot of the town, as well as the big minister in town.  She's dating the most popular guy, Robert.  She had a boy who had been her best friend when she was younger, who has grown up to be quite handsome.  His name is Nate.  But something happened a few years ago, and he changed.  He just quit talking to her, and kind of turned into a man-slut.  And then there is "Judge".  The killer, or in Eva's case, he hits her with his car, but she survives.  We get to spend some of the chapters from his point of view.  We don't know just who he is right away.  (Although I did guess and get it right!)  His mind is quite warped, as you'd expect someone like that to be.  He decides that since Eva didn't die when he'd tried to kill her, that it was God sending him a message and that she was meant for him.  So now he thinks he must send her a message.  And that is what leads to the other deaths.

Eva wakes up in the hospital after the accident, not remembering anything about it.  She can tell her life will be changed as she sees the horrible cuts on her face, and now she has a broken leg as well.  Her parents were out of town when it happens, and her friend Grace and her mom are there taking care of her in the hospital.  This is how it is, it isn't that Eva's parents don't love her, they're just pretty hands-off.  But not when this happens.  When they get home, they decide they must do a better job being parents.  Nate shows up at the hospital, he is visiting his half-brother who spends a lot of time there.  Nate and Eva start talking, and their friendship picks up almost like it never ended.  But Eva had crushed on Nate, and soon she will feel she can tell him.  But first something strange is happening, that she wonders if it is a side effect of the accident.  When someone touches her, she can see their death.  It happens first with her friend Grace and Nate.  She says something to Nate, makes him promise to always have his cell phone, and then the next time he touches her, the vision changes.  So she sees that she can change these futures that she's seeing.  Soon the messages from the killer begin to show up and show their connection to Eva, when the killer cuts her name in one of them.  Eva must figure out who this person is, even though others want her to stay out of it and stay safe.

Such a great story.  Reminds me of how much I enjoyed Don't Look Back by Jennifer L. Armentrout.  And like that one, I guessed who the killer was kind of early one, but again, so many things happened that made me doubt that was the person throughout the story.  And I like that, I like when it isn't just obvious and you know right away.  At least for this kind of story.  Such a great story, and I love the cover, and I'm so glad the book was as good as the cover made me want it to be.
Posted by Lisa Mandina at 3:11 PM

Email ThisBlogThis!Share to TwitterShare to FacebookShare to Pinterest
Labels: Amazon, Don't Look Back, Jennifer L Armentrout, Made For You, Melissa Marr, serial killer