Review: The Fall by Bethany Griffin 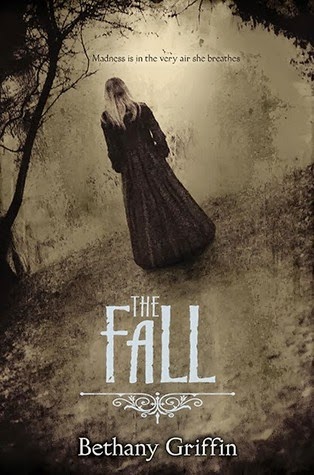 Thanks again to Greenwillow Books and Edelweiss for allowing me to read an e-galley of this title.  I had been hearing so much about it that I've been excited for when it would come time on my TBR list to read it.  I've actually not read the Edgar Allan Poe story that it's based on The Fall of the House of Usher, but have read other Poe stories and so was definitely intrigued.  And now after reading this, I must say I am going to want to go back and read that story as well.  This was definitely a captivating read.  While I'm not sure exactly how I feel about it, I know that it did keep me reading and needing to know what was going to happen. Although I'm not quite sure if we really found out for sure at the end the definite fates of the Ushers.

Our main character is Madeline Usher, who has a twin brother named Roderick.  They live in the Usher mansion with their father and mother, as well as a team of doctors there to study the curse, and supposedly to find a cure for it.  You see all the Ushers die young, and usually are quite insane, or on their way to being completely insane by the time of their death.  The book is written with each chapter jumping around to either a different age in Madeline's life, or else an entry from the journal of an ancestor, Lisbeth Usher.  The youngest we get is nine for Madeline.  It is this year when her mother decides to send Roderick away to school.  To get him away from the house, so that he may have a chance to live and maybe escape the curse.  Their mother is cruel, especially to Madeline.  So that is one reason that Madeline is upset about Roderick leaving.  The other is that she doesn't understand why anyone would want to leave.  At this young age she feels like the house is only out to protect them, and she thinks the house is her friend.  But as her father gets older and more insane, he begins to give her warnings.  At one time he even tries to get her away from the house, to try to save her as it seems Roderick will be saved.  But that one time he gets sick from leaving, and Madeline passes out and doesn't remember anything about where they were.  As Madeline gets older, she comes to pretty much accept that she will live there her life.  When her mother passes away, she is then the heir to receive the curse, and the doctors begin to study her, and she begins to see that the house isn't looking out for them.  She thinks maybe she will find a romance with the new young doctor that comes to work there.  But then it seems he might have a fiancee.  When she shows up, Emily, Madeline thinks maybe now she will have a friend.  Friends make her see that maybe she should try really hard to get away.  And so she tries to figure out how she could possibly break the curse, maybe the only way to do it.  The answer may be in Lisbeth's diary, or else in her grandmother's hidden study, where there are piles and piles of books to look through.  Towards the end she may be getting her wish of her brother coming back to stay, but not at a price she wants.  And while she may find the way to possibly break the curse, again, it may not be a price she wants to pay.

Definitely one that required attention as you were reading, but it kept my attention, it wasn't that I struggled with it.  It did jump around a bit at first, but towards the end it was all kind of linear timewise for the story.  And each chapter was labeled with the age of Madeline or whether it was the diary of Lisbeth.  So at the end when it was almost the same title for each chapter, well that seemed a little redundant, even if it did make sense.  The house made those within crazy whether they were the "heirs" or maybe even just had some Usher blood in them.  The ghosts of Ushers past lived there, and it was possible that all the servants, as well as even the doctors had that link to the family, enough to make them actually be there more to help the house, than to cure any curse.  But the background of where the curse came from was really well devised and made a great start to the family's story.

I think anyone that enjoys Poe's works will probably enjoy the writing in this.  It isn't your normal "horror" type of scary story.  And of course it is set in an earlier time, so it is a bit historical in that way.  It could be considered a great gothic horror story.  So I do recommend it, not as a quick easy read, but as a good, thinking read.
Posted by Lisa Mandina at 7:17 PM