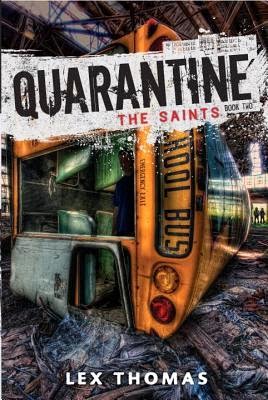 First thanks to Egmont and Edelweiss for allowing me to read this e-book before the 3rd book in the series comes out this summer. Just like when I was reading the first one, The Loners, this one was also hard to put down.  The story from the first one is that there is a virus that kills all the adults, but only the teens get it.  And it causes their hair to go white.  They were quarantined in the high school by the military.  When they reached a certain age, they would "graduate" out because staying in there as adults they would die.

Now, when it seems as if maybe the military has left them to die, and the main character Will's brother David has left the school to see about help, all of a sudden these other people show up.  These other teens.  And since they seem to be there to rescue the students left in the school, they are called "The Saints".  Like in the first book, there are still the gangs.  However most of the Loners escape when they first are able to get out. But as they are leaving, a school bus is run into the opening which blocks their escape.  All the kids run to the quad and they see two adults dressed in helmets who tell them that they can't come out because they will be killed.  But the adults promise to get food to them, and even have food now.  Supposedly they are the parents of one of the students.  Even though they promise the students that there is enough food for each student to last two weeks, the gangs still fight for food.  And the Loners have been decimated by those that escaped, and still end up with no food, like back in the very beginning.  Plus, all the new kids, the Saints, are now there.  Everyone goes back to their areas.  The Saints take over the containment area that the military left that is now blocked by the school bus.

Things again go downhill, gangs fighting gangs, although one of the new kids, Gates, seems to be quite the party animal, and even brings together a lot of the gangs.  When all of the Loners go on to different gangs, leaving Will alone, Will goes back to hide in his elevator.  The Saints end up taking him in, and he becomes really good friends with Gates.  Both of them lost brothers, as Gates brings the news that they had found Will's brother David all shot up in a house.  Relationships will be tested, and some people may be a bit crazier than they had seemed initially.

Once again on the edge of my seat, needing to know what happens next, all the differences between the gangs, and the scheming of certain individuals, all leads up to a thrilling climax.  Great story, and now I've downloaded the e-galley of the 3rd book and I'm ready to find out what happens next!
Posted by Lisa Mandina at 7:40 PM