Review: Far From You by Tess Sharpe 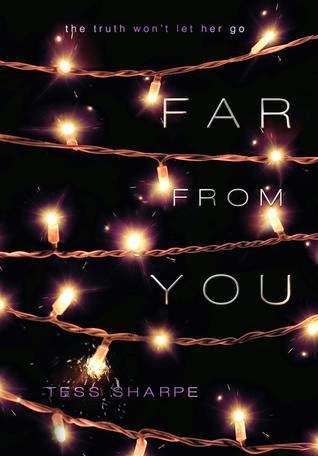 Thanks to the Disney Summer of Chills for sending me an ARC of this title.  I can say for sure that Disney's books they're promoting with this are so far all winners from what I've read, and I actually haven't even read the one I was most excited about!

I believe this is the author's first book, and wow, what a great book!  Once again I'm learning that I really can enjoy a mystery.  This book kept me guessing all along on who it might be.  But never really gave false clues, and I only knew what the main character knew.  I think the relationship in the book was one I somewhat guessed at by little things, and was pleased when it turned out to be the way I thought it was.

The main character is Sophie Winters.  Her life has been hard.  When she was fourteen, she was in a car with her best friend Mina, being driven by Mina's brother Trev.  Unfortunately there is a car accident, and while Trev and Mina make it out with just a few scratches, Mina, who did not have her seat belt on wasn't so lucky.  Her leg was messed up very badly, and she had scars all over her body.  Thanks to the wreck she had to have years of physical therapy, and of course there were pain pills involved, leading Sophie to an Oxy addiction.  Mina and Sophie are so close, and Mina is very worried and notices how much Sophie is really using the drugs.  When her parents find out, they send Sophie to stay with her Aunt Macy to get clean.  She comes back after about 6 months, clean, and ready to stay clean.  But then, she and Mina stop in the woods because Mina wants to get some information about a case she is investigating, and they are attacked by a masked man.  This time Sophie is the lucky one, in that she is just knocked on the head, while Mina is shot and killed.  When Sophie is finally found by a girl who lives somewhat nearby, the police find drugs in her jacket, and so it is assumed that it was a drug deal gone bad, even though Sophie swears that she is still clean.  She begs and pleads to be believed, but her parents don't.  So she is shipped off to rehab.  When she gets out of rehab, she comes back, and the one thing she plans to do is find out who killed Mina.  It is a rough road ahead of Sophie, as she has many enemies now, people who believe the drug story, and blame her for Mina's death.

Such a great story, loved it.  The characters were all really well written, and had a lot of depth.  You felt for them, and some you hated.  But it was in a way that just made the story even better.  I hope you get a chance to read this, as I'll be definitely promoting it, and probably buying it for my high school library where I work.
Posted by Lisa Mandina at 5:51 PM