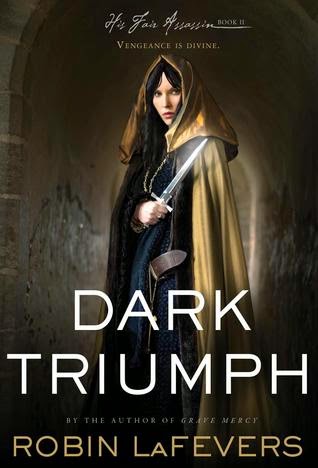 It's been two years since I read an ARC of the first book in this series, Grave Mercy.  And if you go back and read my review, you can see I loved it, gave it 5 of 5 stars.  Unfortunately I didn't get the sequel as an ARC, I was sad.  And so I didn't get to continue until just recently.  I saw that the 3rd book was available as an e-galley on Edelweiss, and wanted to request it.  But, I needed to read the 2nd one.  I was lucky enough to find a copy, and ARC copy no less, of this book on YA Book Exchange.  So I made the trade.  I picked the book up this past week, and while it took me a bit to kind of remember some of the story, the writing was just as great as before.

While this is a sequel, we aren't following the same main character, Ismae, from the first book.  We are following one of the other girls that were being trained as an assassin for St. Mortain, Sybella.  Now Sybella had a secret, she was the daughter of one of the evil men who was attacking the duchess in the first book, d'Albret.  And it is because of this connection that the Abbess sends her back to the castle that he has captured and chased the duchess out of.  The one reason Sybella agreed to go back to her hell of a life, was the promise that she would get to be the one to kill her father.

The book starts out with Sybella seeing an attack about to be sprung on the duchess, and she is able to warn Ismae who is with her and they take off.  All except for the soldiers that stay to fight and hope to keep the duchess from being followed.  One fights beyond what seems possible, until finally he is on the ground.  He is captured, and is actually still alive, so he is stuck in the dungeon, as d'Albret thinks to use him to get to the duchess.  Sybella gets a message from the sisters telling her to set free the man in the dungeon, known as the Beast of Waroch.  Like his name suggests, he is HUGE!  And he is close to death.  Infections set in wounds, broken ribs, many other injuries.  She is not sure how to get him out, let alone help him to escape.  When she finally figures a plan, to get a cart to take him out, first she gets help from his guard, who for some reason helps her with the Beast.  And she is able to anger the Beast enough to get him to move himself some parts of the way.  But when she is so close to getting him in the cart and on his way, one of her taunts is too much for the Beast, and he knocks her out.  When she wakes up, she is now traveling with him, and she knows the convent will not be happy with her.  Not to mention she cannot go back now, they will know he did not kidnap her, at least not enough to get out of prison in the first place, due to his condition.  As she travels with him to find the duchess, they must avoid d'Albret's men, as well as the French, and she must work on helping him to heal.

There is so much in this story, layer after layer, connecting all the characters in such a way that all the things that happen, and the ways they react make perfect sense as you read them.  The love story is good, not insta-love, and that is nice.  No love triangle, although there may be more than one man in love with Sybella, it is in no way a love triangle.  You really root for her as you learn more and more about her story, her past, and what she has endured in her life.  While it definitely ended, unlike the first book, you can definitely see there needs to be a sequel, or finale to the series.  And it seems that 3rd one will follow one of the other girls from the convent.  Now we did also get several parts of the story that included Ismae and Duval from the first story, and it was woven into the story quite nicely.  Now, can't wait to read on, although since it isn't being published until November, you won't get to read my review of it until October.  Although I will post a rating on Goodreads as soon as it is read.
Posted by Lisa Mandina at 5:21 PM