Review Prisoner of Night and Fog by Anne Blankman 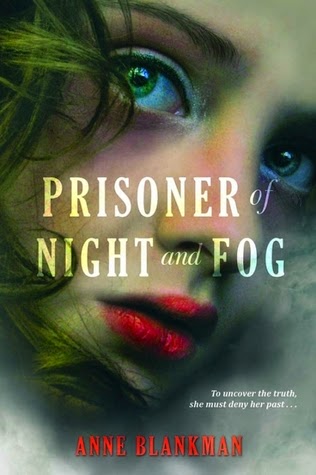 First, thanks to Edelweiss and Balzer and Bray for allowing me to read an e-galley of this title.  I always am intrigued and fascinated by stories about World War II.  Actually this book is pre-World War II.  It is from Hitler's rise.  And what was so interesting about the premise of this book is that it is from the viewpoint of a girl who has grown up in the favor of Hitler.  In fact she has grown up calling him Uncle Dolf.

Gretchen is our main character.  Her father died when he threw himself in front of Hitler and took the bullets meant for him.  Since then Hitler has tried to treat Gretchen and her family as his own family.  He was friends with Gretchen's father from World War I.  Like most Germans during this time, her family is struggling.  Since her father's death they've lived in a boarding house where her mother does the cooking and Gretchen helps.  Gretchen's brother Reinhard also lives in the boarding house, only he is a soldier for Hitler.  It is soon made evident that Gretchen fears her brother, that he will play such cruel tricks on her that she will hook a chair under the doorknob at night to keep him out.  You see Reinhard is the violent type of man many think of when they think of Nazis.  He has no problem with punching his sister, or setting up a wire on the stairs that would trip her.  Their mother doesn't seem to be willing to do anything about Reinhard.  We even begin the story as Reinhard and his friend Kurt almost run over a Jew, and then they jump out of the car and chase him down an alley to beat him up.  Even though Gretchen has been brought up to dislike Jews, there is something that gets to her.  The fear in the man's eyes.  So she tries to use something that Hitler once mentioned, that the street brawls should stop as they only give Hitler a bad name.  She finally gets her brother to leave him alone, mainly because the police are coming, and at this time, the police are not owned by Hitler yet.  But her brother tells her not to come to the dinner with Uncle Dolf that they were planning to go to.  So she and her friend Eva will have to go home on their own. But before Gretchen gets back to Eva, another Jewish man stops her.  This one is young, and attractive quite to Gretchen's surprise.  And he says that it is possible there was something strange about her father's death.  That maybe he didn't mean to get in front of Hitler, that maybe he was murdered.  Which Gretchen did notice a bullet hole in the back of her father's shirt, which doesn't make sense unless someone in the group he was marching with shot him too.

Gretchen's world begins to fray at the edges, she doesn't quite know what to believe anymore.  And as she learns more about her father's past, as well as learning more about exactly what Hitler is actually talking about doing to the Jews, she finds her life getting more and more dangerous.  Her brother is still a danger, and becomes even more so as he finds her spending time with a Jew.  Not only that, Uncle Dolf will disappoint her, and she will see that maybe she can't trust him anymore either, giving more credence to the bad things she is learning.

While the main characters may be fictional for the story, there are all the actual historical figures within the story.  Including Eva, Hitler's mistress, his niece, and all his fellow party members.  I really love how the author tied all these things together in such a creative way, and a really great story.  I had to know what would happen, and how Gretchen put together the pieces about what her whole life has really been hiding.  And I was pleased to read in the notes at the end that there will be a sequel.  While the book definitely left off at a perfectly good ending, there is so much more that could be done as we haven't even reached the actual WWII yet.  It's not up on Goodreads yet, but I'll be keeping my eyes on that so I can put it on my TBR list!
Posted by Lisa Mandina at 5:02 PM