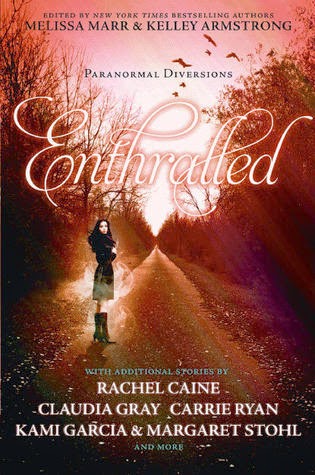 I checked this book out from the high school library where I work because I really wanted to read it.  I'm glad I did, as I can now say I have read a story by one of the authors I'll be moderating a panel with in May, just in case I don't get a chance to read her newest book before then.  That author is Kelley Armstrong.  Along with some authors I haven't read before, there were a few of my favorite authors in this book:  Sarah Rees Brennan, Ally Condie, Carrie Ryan, and Rachel Vincent to name a few.  One of my new favorites, Kimberly Derting was also a part of this.

Some of the stories go along with series of books, such as Rachel Vincent's Soul Screamers series, and Rachel Caine's Morganville Vampire series.  Even Carrie Ryan's story fits into the world of her Forest of Hands and Teeth series.  While I haven't read the Morganville Vampire series, and still don't know that I will, I really did like the story in this book, Automatic.  It reminded me a bit of the whole True Blood idea of making synthetic blood.  Only in this story, they were putting the blood into cans, and into a vending machine.  But something went wrong with it.  The recipe/formula was more calculated for the vampires that had been around longer, and caused the younger ones to lose themselves to the monster inside.

I haven't read Claudia Gray before, unless it was another short story, but her story, Giovanni's Farewell, the first one in the book, was one I really enjoyed.  Ravenna and Cairo were twins, who have a very close connection.  But they have kind of grown apart a bit, until a class trip to Italy.  She finds out that the little episodes her brother has are because he can hear/see what everyone around him is thinking, and it is a lot to take in.  At the same time, Ravenna learns while in one of the tombs that she can see dead people.  I won't tell too much more, just wanted to point out that I really liked this story, and now will have to read the other books Claudia Gray has written.

Another of my favorite stories in the book was Red Run by Kami Garcia.  It's based on one of those old stories about there being a ghost on a stretch of road that if you stopped to pick him up, you would die in an automobile accident or something.  I enjoyed the twist on the story that Garcia put to make it different.

The final story I'll talk about is by another author I haven't read before, Jeri Smith-Ready.  It is called Bridge, and is written in a prose sort of way.  It's about a future when people born after a certain time can often see ghosts.  And there is a ghost who wants to talk to his brother, to save his brother from killing himself out of guilt that it was his fault his brother died.

Sixteen paranormal stories, some better than others, but I think everyone will like different ones based on what types of stories and writing they prefer or enjoy.
Posted by Lisa Mandina at 4:00 PM