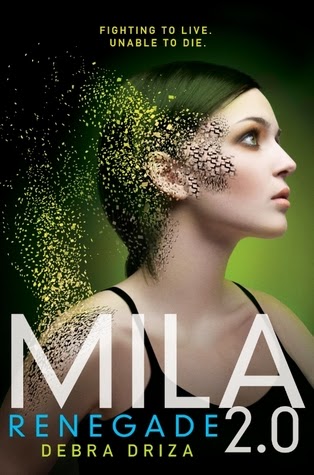 First of all, thanks to Edelweiss and Katherine Tegen books for allowing me to read an e-galley of this title.  I read the first book in this series around this time last year, right after I got to meet the author at the RT Convention.  So I was very excited to get to read this one early as I was ready to know where the story went next.

Mila is an android, something she didn't know when we started the first book.  By the end of the first book though she'd been captured by the original lab who had made her, her mother/creator killed, and she had escaped from them again, thanks to the help of the nephew of the evil General Holland.  She calls her friend Hunter from back where she'd been living with her mom before.  Before she died, her mother had told Mila to look for her father, or at least the man that Mila assumes must be her father.  She convinces Hunter to come out and help her on her quest.  But soon she realizes it might be dangerous for him, and so a couple times she even tries to have him head home without her, and let her go on searching on her own.  But he sticks by her.  Now, unlike what you would think, at least from other books like this, Mila doesn't tell Hunter that she is an android or being chased, just that she is searching for her father because her mother is gone.  As far as Hunter knows, Mila just has a very advanced mechanical arm.

The first man that Mila looks for gives her some doubts about Hunter though.  Convinces her through just subtle statements that maybe Hunter isn't as innocent as he seems.  Maybe he is part of the Vita Obscura, the mysterious organization that is also looking to capture Mila.

So now she doesn't know who to trust.  At one point it seems as if the Vita Obscura, who hate General Holland as much as she does, might even be on her side.  The ending is a good one, if hard to read, and again we're left hanging, wondering still who Mila will trust, and how she will solve the issue of being able to live her life the way she wants to, and not trapped in some lab being dissected and experimented on, before being scrapped.

A great 2nd book. Like I've said before, the 2nd book seems to be a traveling book, and this definitely is one of those.  But it isn't boring in any way. There is lots of danger, and action, and many clues to figure out and ponder.