Review and Giveaway: The Tempest by Brit Constantine 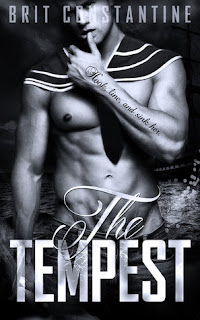 
They call him “The Tempest.”
England’s most feared heavyweight-boxing champion.
He despises the fame and glory, but it’s nothing compared to the hate he inflicts on himself. All he wants is to be left alone to live on his boat in misery.
When I line up for his autograph, it’s instant fireworks. But not the beautiful stars-shine-bright kind. He’s rude. Heartless. A ticking time bomb of rage.
Luckily, I’m not afraid to put a lit match to his fuse.
I upload a private video of him to my one-million-subscribers channel. The video goes viral.
The ex-Royal Marine nearly breaks down my studio door to flag me inappropriate…
…while I’m in the middle of a live streaming event.
I don’t tell him. I don’t switch off the camera. I keep recording, secretly playing to my audience. He should have checked if the camera was rolling, right?
It should be a shipwreck from the moment the storm hits.
It is.
And then … it isn’t.
Our attraction is painful, undeniable, and it’s like I am Eve and his lips are the apple, and damn if his tongue isn’t the snake.
I am the only girl who can put this broken man back together again.
But he knows the secret he is keeping will tear us apart. He knows it’ll force my hand to break ties with the only family I have left in the world.
But once The Tempest, the man with the iron heart, falls in love … he’ll crush anyone who dares to take me away from him.
I have no choice but to go down with his ship.
Hook, line, and goddamned sinker.
—
The Tempest is a contemporary romance story of love, comedy and treachery.
No cheating. No OW/OM. Standalone. HEA. 18+

This was a very intense story.  I really did enjoy it though. The main character is Felicity.  The way she starts out you pretty much expect her to be a bad-ass sexy, get the guy she wants type of girl.  Which she pretty much is.  But, as the story goes on, and we get to know her through her time with her friends, as well as her nervousness/bashfulness around Lenic, we do learn that there is a softer side to her.  When we finally get her background, we can see just why she has always been the way she is about relationships and trust.  Lenic comes off as a pretty big egocentric jerk at the beginning of the book, in that same scene where we get our first impression of Felicity as well.  It is good to know, though, that the author really develops these characters to where you know that isn't who they really are. That they both put on a show for the others around them in their lives.  Lenic has a horrible past, but his past ends up being connected with Felicity's best friend West, in a way more complicated than just the fact that they are rival fighters, and have a big match coming up.

The sex scenes, after all the build up through the first half of the book, are hot and steamy, and totally worth the wait.  Pretty sure I was just as physically frustrated as Felicity by the time they actually got to that point.   And it wasn't just a physical relationship, there were definite intellectual connections between the two.  And the snark and humor in their relationship was fun as well.  And then we have the friends.  Felicity calls her best friend Delphine a c---blocker, and let me tell you, she totally is! And not just her, but Lenic's friend is as well.  It's so funny every time those two pop in at exactly the wrong moment.  But, Delphine is rooting for Lenic when she finds out how perfect the two of them are together.  Now, even once things get to where they seem to be going perfectly, there will still be obstacles in their way.  And they will have to work through it.  This was a very good book, very intense in that you had to actually read, no skimming, but it was very good in that it kept your attention so that you did become lost to the world around you as you read.  A fun, sexy read, a new author for me to keep an eye out for new reads.

Brit Constantine is a twenty-something author of The Tempest, her first published novel. Writing and ballet are the two things she lives for … next to cheesecake and firemen. When she’s not writing, or randomly bidding for useless items on the Web, she’s either earning bruises at her boyfriend’s mixed martial arts club or sipping on a perfect glass of Pimm’s with her girlfriends. She lives in London with her ever-growing collection of shoes. It’s a woman’s right to shoes.