From Award Winning Author
Kathleen Baldwin
The stakes in this game of spies are life and death.

REFUGE FOR MASTERMINDS
by Kathleen Baldwin
Series: Stranje House, Book 3
Genre: Young Adult, Teen Alternative Historical Fantasy
Publisher: Tor Teen
Publication Date: May 23, 2017
Add to Goodreads
Lady Jane Moore has a secret. A secret that must be kept buried. If anyone discovered the truth, her life at Stranje House would crumble. And with Napoleon Bonaparte threatening to invade England, everyone at Stranje House is already in mortal danger.
There's a traitor in the house. Someone is sneaking information to Napoleon's spies, Lady Daneska and Ghost. Jane is determined to find out who it is before suspicions rip apart the bonds of friendship at Stranje House. Her desperate hunt for the traitor ensnares a brash young American inventor, Alexander Sinclair, Robert Fulton's nephew, into an ambush that puts his life in danger. Sinclair is the most maddening young man in all of Christendom, a sharp-tongued rascal with boorish manners, but Lady Jane cannot bear the thought of the golden-haired genius being harmed.
Is Jane enough of a mastermind to save Alexander, her friends at Stranje House, and possibly England itself?
Fans of Gail Carriger, Patricia Wrede, and Caroline Stevermer will love this Regency-era alternate history filled with spunky heroines, handsome young lords, and dastardly villains.
"Baldwin has a winning series here: her characters are intriguing and fully rendered."
- Stacey Comfort, Booklist
"Refuge for Masterminds moves at a fast pace from the first page and doesn't stop. Although it is written with a young adult audience in mind, it is a fun and enjoyable novel and will also appeal to adult readers."
- Francesca Pelaccia, Historical Novel Society

This is a series that I have really enjoyed, and this book continues that enjoyment.  I always love a good historical fiction that makes me interested in learning more about a certain time period.  Particularly when it gets me interested in a time period I either never thought about, or just never had any interest in even when I might have learned about it in the past in school, etc.  I also love a good series where each book focuses on another of the main characters, as well as keeping up involved in the lives of those from books before, and even getting us interested in whatever other characters we might get future books about.  I enjoyed a lot about Lady Jane, and I also enjoyed the banter between her and Mr. Sinclair in this book.  Their romance was very sweet.  The reason that Jane did not want to go to London was definitely well-hidden until it was revealed, and until then, I was unsure what in the world could have kept her from wanting to go.  But that reason was so good!  And the turn it took once she was in London was even better.  I loved the puppies, and the idea of creating a fake leg for a dog with only three legs was so sweet and a neat addition to the story.  There was a bit with a leech at the end that made me laugh out loud, as I could totally see it happening.    Another fun look into a time period and environment that we don't always spend much time looking into, not to mention the political world at the time and how the society and town worked during those days, not to mention the scientific ideas that began to spring forth as well, probably in very similar environments.

Other Books by the Author

Prizes up for grabs:
Be one of three lucky winners:
$10 Gift Card + hardback copy of Refuge for Masterminds
Contest runs from May 15 - June 3, 2017.
a Rafflecopter giveaway 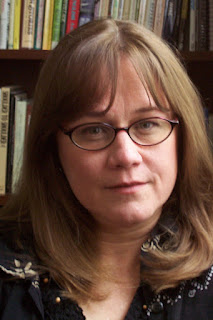 Kathleen Baldwin loves adventure in books and in real life. She taught rock climbing in the Rockies, survival camped in the desert, was stalked by a mountain lion, lost an argument with a rattlesnake, spent way too long in college, fell in love and married her very own hero.
A SCHOOL FOR UNUSUAL GIRLS, the first book in the alternate history series for teens, was awarded Spirit of Texas in 2016, is a Junior Library Guild selection, and Kansas NEA Reading Circle gave it a starred review in their 2016 Best of the Best for High Schools. Ian Bryce, producer of Spiderman, Saving Private Ryan, and other notable films optioned the series for film.
REFUGE FOR MASTERMINDS, Book 3 in the Stranje House series, releases May 23rd.
#1 New York Times bestselling author Meg Cabot calls this romantic Regency adventure, "completely original and totally engrossing."
Official website:  http://kathleenbaldwin.com/
Social media links:
Facebook | Twitter | Instagram | Tumblr | Pinterest | Google+ | Amazon | Goodreads

Follow the book tour from May 15 - June 3, 2017.
Get sneak peaks, excerpts, fun facts and other never-before-published info on Refuge for Masterminds.
Click here to check the latest tour schedule.