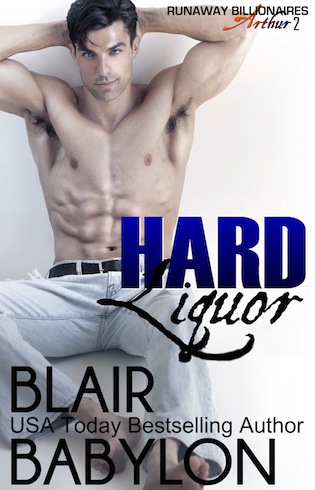 
London trial lawyer Gen has managed to corral that randy colt His Lordship Arthur Finch-Hatten, the Earl of Severn, at least as far as anyone knows. In public, he seems to be behaving himself, but she’s kind of gotten involved with her client in a way that the Bar’s Ethics Committee would totally not approve of. With Arthur’s impending trial in the House of Lords and the constant backstabbing in her law office, the last thing Gen needs is for Arthur to whisk her off to Paris for the social wedding of the century to schmooze the people who will decide his fate.

Gen has broken all the rules, and she could very well end up with a broken heart.
She needs a stiff drink, and it had better be hard liquor.

Hard Liquor is the exciting conclusion to the Arthur Duet that begins with Stiff Drink.

Arthur stood in the opening of the front doors, framed by the light behind him and the imposing edifice of Spencer House, waving as the last guest’s car skidded on the tiled driveway around the fountain and drove off into the night. Exhaust from the cars fouled the spring breeze, but it blew out over the formal gardens and into the deer park within minutes, leaving only the stars, his estate, and his arm around the softness that was Gen.
“Come inside,” Arthur said. “You don’t want to catch a chill, pet.”
“Oh, is it ‘pet’ now?” Gen turned, brushing against his side, and walked ahead of him into the foyer.
When she turned back, the chandelier above was shining on her lustrous hair, her dark eyes were flirting with him, and that emerald silk dress had been poured over her curves.
Arthur lost his breath. “Gen.”
“Yes, sugar?” She was still smiling at him.
He slammed the door and was across the floor before he knew it and grabbed her.
“Arthur! There are people—”
“No, there aren’t.” The guests had all departed, and the staff would be cleaning up the dining room in the far wing of the house.
He lifted her in his arms, tossing her a little to show that he could indeed carry her wherever he wanted to, and strode up the stairs.
“Arthur, where are we—” She was giggling so hard that she couldn’t talk.
“Upstairs,” he said. He tried to make it light, amusing, but it came out like a growl. His voice felt deeper in his throat.
“What did that man say to you at dinner?”
“No matter.” He didn’t want to talk about Lord Asshole. “Tell me no if you don’t want this. Tell me no or amber or red.”
And it would rip him apart, but he would stop himself.
He whispered, “Tell me amber or red or put yourself in my hands.”
Gen wrapped her sweet arms around his neck, and she buried her face in his neck, kissing his skin above his collar.
Fire and testosterone raced through his veins.
She whispered, “I’m in your hands.”
Arthur walked faster, taking the stairs quickly.