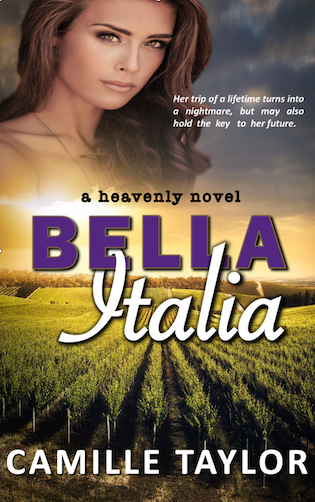 
Small-town wallflower, Adelaide Montgomery has lived an uneventful life—until she witnesses the murder of her best friend…
Adelaide clings to the simple security of a home and a wish for family—desires that sent her former fiancé into another woman’s arms.
Happy to remain in Heavenly, Australia for the rest of her life, she reluctantly gives in to her best friend, Rachel’s pleading to join her on a trip to Italy. A decision which will alter her life forever.
Gorgeous men can be deadly killers in disguise…
When her best friend returns to their hotel suite with two male companions the night doesn’t go as planned and Rachel is murdered in cold blood.
Able to identify the killer, Adelaide finds herself a target, barely escaping with her life.
In order to protect his witness, Rome Inspector Antonio Cardellini hides Adelaide at his family’s winery. Though Antonio is a professional and Adelaide is under his charge, his feelings quickly surpass the limits of his job. Knowing one day she will return home, he struggles to distance himself, but the trial and his family continue to throw him and Adelaide back together.
Will Antonio put his badge above his heart? Or will he risk it all—his career, Adelaide’s life, and the possibility of a future together—all for a chance at love?

EXCERPT:
She stared into his deep blue eyes, feeling the warmth of them. Her stomach somersaulted. Holding him this close was dangerous. She tried to warn herself but her body refused to listen to the commands her brain was sending out. He watched her intently. What was he thinking? Her heart beat sped up until it was pounding in her chest. The heat from his body liquefied her muscles and his manly scent, so intoxicating to her filled her lungs.
Pressed up against him, she could feel every hard pane of his chest. Her breath caught in her throat as desire flooded her. She shifted, an urgent ache gathering between her legs. Her mouth dried even as her belly quivered. Moving her hands from around his neck, she cupped his jaw.
Adelaide swallowed with difficulty. He wasn’t pushing her away—nor was he encouraging her.
Insufferable man.
Whatever happened between them would be her choice she knew. She—Adelaide Montgomery—for the first time in her life needed to make the first move and the idea both thrilled and terrified her.
“Adelaide—”
She cut him off when she crushed her lips against his. She didn’t think, just felt. Allowing desire to take her where it wanted to go. While afraid of rejection, the fear of always wondering ‘what if’ overrode her reservations and made her bolder than she’d ever been before. She took what she wanted, and she wanted him.
His lips were soft beneath her own as his hand on her back pushed her more firmly into him, stoking the fires within, feeling almost brazen as she sucked on his tongue and he moaned.
She deepened the kiss, one hand sliding into his hair and tilting his head for better access. His tongue rasped against hers, sending delicious tingles down her spine. She had never kissed like this before—never had been kissed like before. What more had she never experienced before? It was one thing to be told what you were missing, it was quite another to be teased with the promise.
Antonio’s hand slowly inched up her thigh and beneath the towel, finally resting on her bottom. A hot rush of liquid heat pooled between her thighs. Every touch made her feel beautiful and cherished. Her body burned with delicious heat, a firestorm of sensation and yet she didn’t want to put it out, only to feed the flames more until it was consuming her. Until her entire consciousness was blind of all things except this burning need. 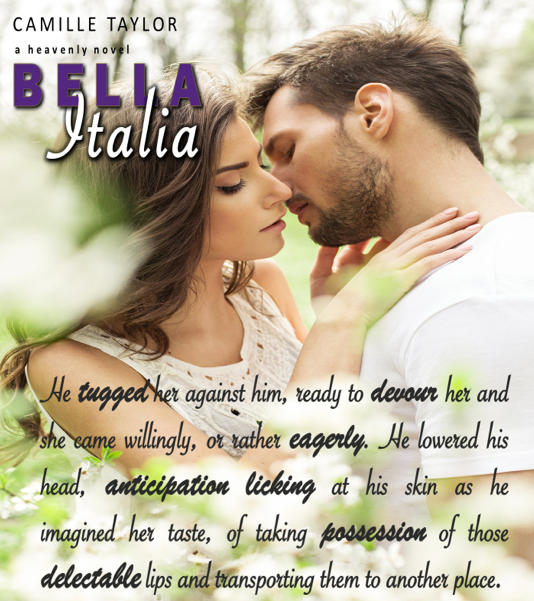 Author Bio:
Camille Taylor is an Australian sexy romantic suspense author who lives in the Nation’s Capital with her fluffy sidekick. She spends her time reading, writing, blogging and procrastinating on Pinterest looking at nail art, books, home improvement tips and cake decorating. A bookworm, she enjoys most genres, particularly romance and mysteries and is HEA chaser so you’ll always find one in her books. She started writing at sixteen and is currently working on her Harbour Bay and Heavenly Series, both set in Australia. Camille is also an incurable genealogist and has traced her heritage to England, Scotland, Ireland and Russia. She loves scrapbooking, hockey, tae kwon do and travelling.