The Fallout (The Compound #2) by S.A. Bodeen 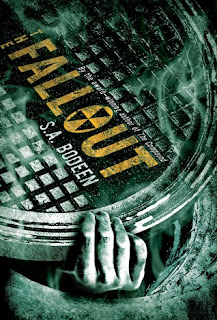 First, thanks to Edelweiss and Feiwel & Friends publishing for allowing me to read an e-galley of this over the summer.  When I saw this was coming out I was very excited!  I read the first book, The Compound, back when it was nominated for one of our state library awards.  And I really liked it.
Without being too spoilery, I do have to say that this book starts about 6 or 7 years after the other one, after the family has made it out of the compound.  All except for their father, who is believed to have died in the fire.  So now Eli gets to be reunited with his twin Eddy and his grandmother.  But it's not as perfect as they'd like it to be.  Because now there are extra siblings.  Lucas, Quinn, and Cara. Siblings that would have been supplements to the family's nutrition in the Compound if their father's experiment had worked the way they'd wanted.   And they are trying to stay private so that the press can't harass them for what they've been through.  And this means they are stuck in their house.  They begin to have outings that are as simple as going to Costco, just to get out of the house.  At Costco, Eli sees someone and begins to believe they might be followed.  He even gets online and sees a hash tag on Twitter of people who think they've seen the family of the billionaire.  And one person has seen them at Costco.  Eli and his brother want to get involved in the company.  And Eli finds a charity he wants to learn more about.  When he goes to the research facility he meets a girl.  But he can't be honest about who he is because of the crazies.  On one of their next outings, Lucas disappears and is found by a teen boy named Tony.  Eddy soon becomes friends with Tony, inviting him to a baseball game outing, and as Eli soon learns, sneaking out of the house with him.  Lexie has decided she wants to  find out who her biological parents are.  And Eli is trying to find out why these people are following him and his family.  One of the people he catches following him leaves a business card, and it turns out this guy is in the end of the world bunker business.  And what he wants is the family to check out the bunkers and see if they would be good.  Many things are happening, and the ending, well, it's suspenseful and full of surprises!  Eli finally lets his brother Eddy in on just how horrible things were in the compound to help him understand why their father isn't as great as he remembered.  And this helps the twins get closer to each other and Lexie to be able to work together and save their family from yet another scientific experiment, this one on helping with aging, which has to do with the charity for the disease Eli was so interested in, Progeria.
Another great story.  I think the readers that liked the first one will love this one too!
I kind of think this might have left off for another book in the series!  And I will be waiting hopefully for it.
Posted by Lisa Mandina at 10:42 AM