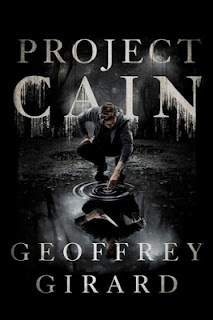 Thanks to Edelweiss and Simon & Schuster Books for Young Readers for allowing me to read an e-galley of this book in June 2013.  I loved the idea of reading a book about boys who were genetically designed in a lab to be the clones of serial killers.  While I wasn't quite sure what the scientific research in this would be, other than maybe to see if it was nature or nurture that caused their violence, it just sounded like a unique story.  And that it definitely was.
The main character is Jeff, and he was cloned from Jeffrey Dahmer.  He was raised by one of  the actual scientists.  Told his mother died in a car accident when he was younger, that he was also in, and that is why he can't remember her.  Well, the book starts out with his "dad" telling him that is actually not true, and leaving him with papers explaining what really he was, and then being left alone.  Left alone until men from the DSTI labs come to take away everything his father has left.  He hides in his father's secret room until they go.  Until another man shows up, Castillo.  Castillo has been hired by the labs, or maybe the government, to find all the clones that were just set free from the labs.  Set free probably by Jeff's father, and amidst murders of doctors, nurses, and other people at the labs.  At first Castillo think that Jeff can help him.  Until one night Castillo gives him some money, and tells him to get lost.  Jeff can't just take the money and leave.  He has nowhere to go, and he figures that Castillo is his best chance at finding his father.  Along the trip to find these cloned serial killers, Jeff and Castillo's relationship will change.  As Jeff begins to see what kind of life he really had growing up, how he was actually lucky compared to some clones that were subjected to some of the horrible same abuses their originals dealt with, he finds that Castillo's messed up life kind of fits well and matches his needs for a friend.
I loved the idea of this book.  And it is a good story, had a good plot, characters, all of that.  Only, it kind of started slow.  They sit in a hotel room for a LONG time at the beginning.  And it is kind of boring.  I know that is the point of it, but it made it hard to get going in the book and stay hooked at first.  If you keep going, and give it time, it will get you hooked to where you are wanting to keep reading because you need to know what is going to happen.  So just keep that in mind.  I found the information about the serial killers that was included, which also included pictures of them, was fascinating.  The back story of Jeff's father, the scientist, and how he wondered if he himself might have been related to one of the possible suspects of Jack the Ripper, was interesting, so that added as well.  Again, I could see it being a hard read for someone who needs to get right into the story, but if you can push through that first part, and just keep reading for the info on the serial killers, I think it is enjoyable.
Posted by Lisa Mandina at 9:00 AM