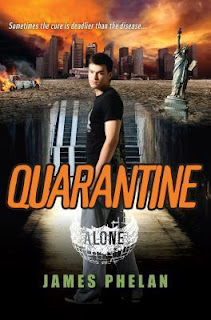 First of course I must thank both Netgalley and Kensington Books for allowing me to read an e-galley of this book.  I enjoyed both of the other books in this series, I think maybe a trilogy?  It did kind of leave at off at what could be an ending.  You can read my review of Chasers HERE, and Survivor HERE.  This is a zombie series, but a little bit different than normal.  The "zombies" or chasers as the main character calls them, want to drink the fluids in people, not necessarily eat them.  And there are "lesser" chasers, nicer ones, that just want to drink any water or other fluids they find, but don't chase people to try to get them.
We left off the last book with Jesse being sure he was going to go visit the people that were gathered in the Chelsea Piers according to his friend Caleb.  At first he's not sure about leaving, as the zoo animals have actually now been attacked by the chasers.  But the girls, Felicity and Rachel, both tell him he needs to go and find if there are other people, and if they will want to head north with them.  While Rachel hadn't wanted to leave the zoo animals, she felt responsible for them, the recent events have made her ready to leave to try to save her own life.  There is more found out about the bombs that caused the whole epidemic, and once Jesse reaches the Piers, he sees a community that seems to have found a way to survive.  However they are torn between those who want to just stay until help come, and those who feel they need to make their own safety and find their way to help.  Jesse tries to convince them to leave, but understands why some would want to stay there.  Not only are people within the community obstacles to leaving, there are other groups of survivors who attack the compound.  Not to mention figuring a safe way for all of the people to get out and past the chasers safely.  And there continue to be drones dropping bombs it seems, and it seems as if they are American.
There is a solution, although we don't necessarily see how it all goes in the end, but we do know the direction things seem to be going when the book ends.  Another good story, a different take on zombies and survival.  A good quick read that I would highly recommend to boys who were reluctant readers.
Posted by Lisa Mandina at 6:00 PM