Anna and the French Kiss by Stephanie Perkins 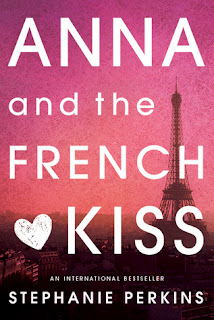 I got a free copy of this book at the RT Convention back in May.  I think I saw the author there, but didn't get an autograph, although now that I've finished the book, I wish I had!  I'd heard so many other bloggers talk about this book.  But I really don't read that much realistic fiction, and not a lot of romance stories really, well, not just romance when it is YA.  But, I started reading, and when I did, I was quickly caught up in the story and loving it.  So, for those few of you out there, besides myself, who hadn't read this yet, here is my review.
Anna is the main character and her famous author father has decided that she is going to spend her senior year at a fancy boarding school in Paris.  (P.S. - I love that her name is Anna and she is going to Paris because my younger sister's name is Anna, and she loves all things French.) Anna doesn't want this.  She has a wonderful best friend, not to mention a growing romance with a boy named Toph.  So of course we start out with Anna in her room at her boarding school and her parents leaving.  Now this boarding school seems to be for children of rich/famous/important parents, like Senators, etc.  Whereas she doesn't really consider her dad to be that.  You would probably compare her dad to Nicholas Sparks for what type of books and movies he writes.  Fortunately for Anna, her next door neighbor comes over and introduces herself. Meredith is really nice, and Anna is so glad for the immediate friend, and then her friends that kind of come along as a package.  One of them she meets the first night as she is leaving Meredith's room.  His name is St. Clair, Etienne St. Clair to be exact.  And he is that boy.  You know, the one that is just as cute as can be, and so funny and nice that all the girls have a crush on him.  And of course, he has a girlfriend.  Her name is Ellie and she went to the school with all of them last year, and is now at a college nearby.  The others in the group are Rashmi and her boyfriend Josh.  Throughout the year as Anna gets closer to all of them, there seems to be a connection between her and St. Clair.  And it seems that he may feel it too.  But since he has a girlfriend, she just assumes it is that he's such a nice guy she mistakes that.  And they do become best friends.  Which makes it harder whenever one of them seems to give in or do something that brings to light their feelings.  St. Clair's dad is a jerk, but rich.  When he finds out his mom has cancer, his father won't let him come home to visit for Thanksgiving, makes him wait till Christmas.  Now, St. Clair has an English accent (swoon!), but his father is French, and  his mother lives in California, and really he is American.  Anna also doesn't get to go home till Christmas, why waste the money her dad figures.  So they get even closer since the rest of their friends, and his girlfriend do go home over that break.  Now this is a school for American children, so when people leave, they go out of town for real.  When Anna goes home over Christmas, something horrible happens, and the only person she feels she can talk to is St. Clair, and as you can guess their feelings get even stronger.
Of course there are all kinds of mixed signals, and stubborn moments that keep them from really ever being able to get together.  At least until they get some things figured out.  I love how there are real life examples and things that happen in their classes that help them figure things out.  It's not like they just have these epiphanies out of nowhere.  And really the story is told from Anna's point of view, so we only get to hear about St. Clair's epiphanies when he tells her about them.  Personally, I enjoyed and really connected with the story because I know how often I have been in what feels like the same situation as Anna.  At least at the beginning.  Being in love with such an awesome, funny, nice guy who is a friend, but has a girlfriend.  So while it seems they're  flirting with you, you know they can't really be.  Unfortunately for me, it's never changed and turned out the way it does for Anna.  Which is why I read books like these.  Such a good, good read.  Love it, and will be reading more by the author from now on!
Posted by Lisa Mandina at 5:29 PM