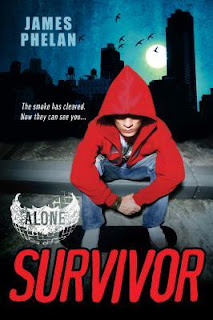 I purchased this book because I was unable to find it at any library near me, and I was able to get the 3rd book in the series from Netgalley.  First you can go back and check out my review of the first book in the series, Chasers.  And I must say, I am in a zombie world with all the books I've been reading lately, which isn't bad.  Maybe it's just to keep me until season 4 of The Walking Dead starts in October.
So there was the big twist at the end of the first one, but I won't give it away in case you haven't read it.  I will say that Jesse is now out looking for other survivors on his own.  He's found a home with video tapes of a girl, Felicity, who has left like a journal every day of what has happened since the beginning of the disaster.  But when she doesn't show up, he decides to leave her a note that he will be waiting outside the 30 Rock building, where he'd been staying with his friends, every day at 10 am in case she wants to join up with him.  Well on his way back to 30 Rock, what has been his home, he sees what looks like some soldiers.  But they don't act like he thinks they would, in other words, they don't seem to be there to help him.  In fact, if it wasn't for one that was kind of nice, the others would have shot him as if he was one of the infected.  On his way to Central Park to look for Felicity, because her last video mentioned going to try to find the "friendly" infected that she's seen, he is found by the Chasers.  The Chasers are the ones that are not so friendly, they chase you and then attack and kill you.  In order to escape them, as he goes into Central Park, he ends up at the zoo.  At the zoo he meets Rachel.  Rachel was an intern at the zoo when it all happened.  And soon all the other workers that had been there with her left to go their families.  Her family was in Texas, and she just couldn't leave the animals, so she stayed.  And she's been there, pretty much safe since.  Jesse tells her that he saw the polar bears wandering the city before, and she admits she let them loose because she figured they could take care of themselves, and there was no way she'd have enough food to keep them alive along with the other animals.  He wakes up late the next day after spending the night in the zoo, and while Rachel tries to get him to stay and be safe, he still heads out to 30 Rock to see if he can find Felicity, but he guesses that he's missed her because he is late.  While out he again runs into another survivor.  He's got two huge mail bags that he took from an overturned mail truck full of food and supplies to get back to the zoo.  He'd been attacked on the search for food, but so far it looks like just a shallow wound to his hand.  Caleb startles him by asking if he's stealing mail.  At first Jesse isn't sure if Caleb is going to try to take his food, or what.  He seems to get Caleb to offer to help him with the food, when once again, Chasers find them.  They each grab a bag, and run for Caleb's place.  Caleb is staying in the bookstore where he worked, just a few blocks from where Jesse would need to go to get back to the zoo.  Caleb has brought in generators and has a pretty nice set up.  So Jesse ends up staying the night, and once again oversleeps.  So he skips trying to meet with Felicity, and just gets Caleb to help him take the food to the zoo.  Eventually Jesse will get all of them together, but will he be able to keep them together, since Caleb likes his own spot, and Rachel won't leave the animals?  And while Jesse heard from the soldiers that they should head north, the cold seems to stop the infected better, he can't quite convince all of them.  But he keeps working on it.  There are more things going on, drones flying in hitting what looks like help with missiles.  So the whole world is just more confusing than even this crazy disease.
We get some more information about what might have happened, but in the end it seems there might be more questions than we started with.  I love the little comments about the tv series Lost.  And I can't wait to see where the story goes next.  It'll be one of my next reads!
While you're here, don't forget to check out my 4th Blogoversary Giveaway, my Authors are Rock Stars with Tessa Gratton giveaway, and think about signing up for the September is for Sequels Giveaway Hop, which I will be adding a month long challenge for those who want to join in as well.
Posted by Lisa Mandina at 5:06 PM