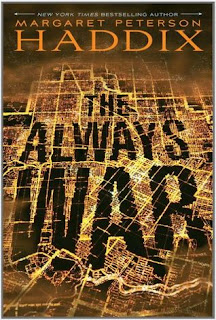 I've been a fan of Margaret Peterson Haddix since I first read Among the Hidden, the first book in the Shadow Children series.  I loved that whole series, and then got caught up in her stand alone novels, as well as her Missing series.  I'd seen this book around, and it sounded interesting.  I got it at a half price Scholastic Warehouse sale earlier this year, and finally got around to reading it this week.  And I must say it was a pretty good little story.  I say little story because it was a pretty short book.
The  name means basically what you think.  The characters are living in a future America that is divided in half over water, and has been at war for over 75 years.  Tessa is going to a big rally where a local hero is going to be celebrated and given a medal for bombing an enemy city.  Tessa knows this boy, as it is people around her age that are actually fighting the war mostly.  His name is Gideon, and they grew up in the same building.  Tessa doesn't understand all the hopelessness that the people around her have.  She refuses to give up, and when Gideon shows up, and then declines the medal, saying that he is really a coward, she runs out of the auditorium after him to see what is going on.  But he is swept away by the officials.  Soon he is brought home to the apartment next to hers.  And one night she hears tapping on her wall.  It sounds like a pattern, and so she gets on her ancient computer and finds out it is Morse code for SOS.  She's not sure how she'll get into the apartment to help him, his mother has always been a bit snobby.  But she gathers the flowers she can find, and brings them as a delivery, telling his mother she must deliver them straight to his hands.  He asks her to bring her computer over, and when she does, he looks at footage of his bombing run that he got the medal for.  And he sees all these innocent people going about their business, dying as the bombs are dropped.
Tessa is not sure what this means.  But when she catches Gideon sneaking out of the apartment one night, she decides to follow him.  She ends up on a military plane that he purchased on the black market, and when they go into enemy territory so that he can try to apologize and surrender for what he did, things don't turn out quite the way he thought.  The enemy territory is a bit different than expected.  Not to mention that Tessa wasn't the only stowaway on the plane, a girl named Dek, who works for the guy who sold Gideon the plane is also there.  Together they search through the enemy territory trying to figure out what is going on, and how to get back, and what to do once they get there.
A quick, but good story.  Love the bit of a twist at the end.  Won't give too much away, but it reminds me of another science fiction story that has a twist, but it's kind of an opposite twist.  Hmm, that's confusing sounding.  But if I tell you what story, and you've read that story, you'll know what happens in this book.  And if I tell you what happens, or what that story is and you haven't read it, well I'll mess that story up for you too!  Anyway, it's a good middle grade level read.
Also, I'm really excited because this author is coming to my town in about a month.  I can't wait to meet her!
Posted by Lisa Mandina at 11:55 PM