Once We Were (The Hybrid Chronicles #2) by Kat Zhang 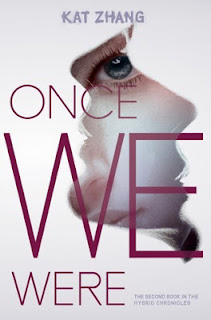 Thanks to Harper Teen and Edelweiss for allowing me to read an e-galley of this in June.  I just read and reviewed the first in this series right before I got this to read, and you can read my review of What's Left of Me HERE.  Know that if you haven't read the first book yet, this review will probably contain some spoilers for you.
Addie and Eva are living with friends of Peter's.  Peter is who helped them to escape at the end of the first book.  They are living with the girl(s) who were their roommate at Nornand (I always have trouble remembering the name of the place, it's such a weird word), Nina/Kitty, and a woman named Emalia.  A few apartments above them Ryan/Devon and Lissa/Hally are staying with another sympathizer to the hybrids named Henri.  They are getting to be friends with some other hybrids, Christoph, and Sabine, and Cordelia.  As well as Jackson who actually was the first person to give them hope before they escaped.  These new friends have an idea to start revolting, and helping people outside of the hybrids realize what is being done in these institutions.  First they start with some explosives/fireworks at a big rally the government is having.  Along with the explosions they drop some flyers that Addie has drawn of hybrids.  The government's big announcement is that they have a surgery which is pretty close to being a cure, and they are going to build a brand new surgery center to start bringing in hybrids to cure them.  While Addie and Eva are a little shaken up after the first display of rebellion, their new friends come up with a plan to blow this place up.  Ryan is essential to the plan with his expertise of building what they must admit is a bomb.  Lissa/Hally is out, she doesn't want to do this.  And while Eva gets swayed into helping, Addie isn't quite sure.  And it's not just that.  The two girls can now have their own private time, where the other will go away and leave them all alone.  Eva enjoys this for getting to spend time with Ryan alone.  But when she wakes up with Jackson, she is shocked, not only that she doesn't remember anything that led her to this place, but that she had no idea Addie liked him that way.  And so there is more tension between them.  In the end they must decide if this rebellion is really how the others have made it out to be, bombing an empty building to make a point and keep other hybrids from suffering as they did.  Or, do these new friends of theirs actually have more to the plan than they're letting on, and how far will Addie and Eva go to be comfortable with what they're doing as well as being able to keep their new friends.
A good sequel, although I had trouble kind of staying with it the first half.  It wasn't a book that I had too much trouble putting down.  And I was really only made to pick it back up in order to go ahead and finish it so that I could review it before it expired.  Again, I feel the series is probably a good one, and I will have to read on to know what happens next, especially with the Jackson part of the storyline.
Posted by Lisa Mandina at 10:00 AM