The Dark Between by Sonia Gensler 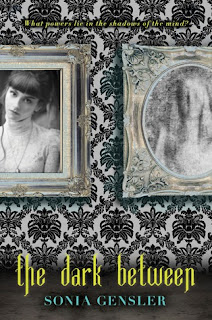 First thanks to Edelweiss and Knopf Books for Young Readers for allowing me to read an e-galley of this book.  I'm glad to see more ghost stories these days, or at least it seems like there is more.  Although while this is a ghost story, and that is a main theme throughout the story, it is not as if that is all that happens.
There are 3 main characters.  First we meet Kate.  Kate works for a medium, but one who fakes thins for her customers.  The way she fakes things is by having Kate appear during part of the seance looking like a ghostly creature, then she'll disappear.  She also has boys who live on the street that will do investigating for her of her customers, so that she can find out the things that will convince them she is for real, because how else would she know these things?  Well we begin with one of these very seances.  All is going as planned until someone says the name Frederic Stanton.  This shocks Kate as she is "disappearing back into the spot behind the medium's chair, and the cover to her hiding spot drops loudly.  At which point she is grabbed by one of the men there and the medium is said to be a fraud.  Turns out this man is Kate's father, or was.  She was illegitimate.  He supported her and her mother, but one day the money stopped, and now Kate knows it was because he died.  Unfortunately now that she has been unmasked in front of the patrons, she is fired.  She goes to hang out with her friends, the street boys, and tries to figure out what she will do next.  Her friend Billy, who is about 8 years old, is getting ready to do some really important investigating, and wants to trade his knife to Kate so she will be safe.  And in exchange, he holds her father's watch.  He tells her if he doesn't come back in the morning, the deal will have gone wrong.
When he doesn't come back, Kate fears the worst as he said, and decides to go to the man who caused her to get fired and demand that he make up for her lost job.  The man is Mr. Thompson.  He lives and works at the local women's college, Summerfield.  So she heads to the college.  As she approaches the gates trying to get past the man at the gate, a young man walks up.  This is our 2nd main character, his name is Asher.  Asher is a man unhappy with his father, and things that happened to his family.  He has come to Summerfield as well, to visit with Mr. Thompson, as he is a friend of his father.  He is able to convince the man at the gate to let them in, especially when Elsie, Miss Atherton is asked to show them around while they wait to meet with Mr. Thompson.  Elsie is a photographer  And she has seizures, one happens at this very first meeting.  She also takes a medicine for it that makes her very sluggish.  As Kate must run to get her medicine, and then Asher carries her inside the house, they are thanked by the Thompsons.  And are asked to stay.  Even Kate, after she tells Mr. Thompson why she is there, is asked to stay, and given something to help out with while she is there.  The three of them spend a lot of time together, and we soon learn that Elsie sometimes sees ghosts when she has her fits.  And when Billy's body turns up dead, Kate begins to wonder what happened to him, as well as what this all may have to do with her father.  The three get involved in the mystery, searching to find answers.
I enjoyed this book.  I feel that Elsie annoyed me a bit with her almost insta-love it seemed.  But I like that it wasn't the true insta-love, in that it didn't work out.  And that Kate would call her on it.  I think that the story left off in a way that could be the end, or that there could be more.  And I would be interested to see what happens next with these characters.  There was some interesting science type stuff in the story, which I've always, as a former science teacher, been intrigued by how science is used to try to prove ghosts exist.  At the end of the book the author also included some information about what science topics were actually going on during that time period, and even gives suggestions for those who want to learn more.
Posted by Lisa Mandina at 11:02 PM