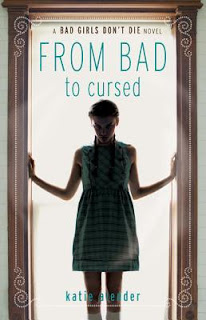 I got this book for a good deal at a Scholastic Book Warehouse last December, bought it the same time as I bought the first one, Bad Girls Don't Die, which you can see by clicking the linked title that I loved!  This one was still good, but kind of seemed a bit longer and maybe went on a bit longer than it needed to.  I don't know, it was still good.
Our same characters are back in this one, Alexis and her sister Kasey, Alexis's best friend Megan, Alexis's boyfriend Carter, and even Lydia, who had been one of her friends at the beginning of the first book.  We start out and Kasey is away at a special place for people who need to get away.  The family now lives in a neighborhood where all the houses look the same.  Kasey comes back from school and will be going to high school with Alexis.  She soon meets some girls to be friends with, and joins the Sunshine Club.  All the girls in this club start dressing very nice, and wearing makeup, doing better in school, and holding each other to the high standards.  Kasey tells Alexis that she thinks there is something weird with the group.  Some weird things happen with a Ouija board, and then when Alexis goes to pick Kasey up at a party, so she kind of believes her.  In order to try to save or stop or just find out what is going on, Alexis and Morgan go to one of the Sunshine Club meetings with Kasey and join.  Only now they've said the oath, and they're in.  At the same time Alexis has entered a photography contest, and actually becomes one of the finalists.  Turns out that the famous photographer that Alexis has admired was also once in a similar club, they are all Aralt's girls.  Aralt is a ghost, or a man that lost his love, and was put in the book by his lover.  Things just get better and better the more they belong to the club.  The only thing that doesn't seem to be working right is Alexis's relationship with Carter.  And this is when she starts thinking maybe Aralt isn't all he's cracked up to be.  Not to mention other things she learns about the whole back story and the "book" online.
It's really hard to describe this story I think.  It was pretty detailed.  In a good way though!  I still enjoyed it, especially the beginning.  But once Alexis and Megan got sucked into the whole Aralt thing, I began not liking them quite as much.  And maybe that is why I didn't like this book just as much the first one.  I'm going to read on, I still like the author's writing, and the characters.  And I want to know what happens next with them.
Posted by Lisa Mandina at 9:00 PM