Review: Worlds of Ink and Shadow by Lena Coakley 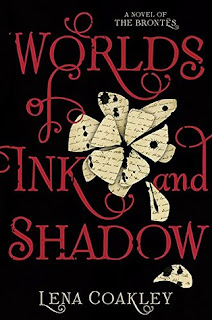 First I'd like to thank Netgalley and Abrams Kids for allowing me to read an e-galley of this title.  I'm always intrigued with stories that are going to be historical fiction about authors.  I don't know a lot about the Brontes, although I have read both Wuthering Heights and Jane Eyre.  At first I wasn't really pulled in, it didn't feel like there was that much about their lives in it.  But as I got reading, I did begin to see things that gave some hint into why their stories were the way they were.

The story is about Anne, Charlotte, Emily, and their brother Branwell.  The two oldest, Charlotte and Branwell, are the writers.  And when they write, somehow they are able to open up and go into the worlds they are writing.  In the past they would allow Anne and Emily to go with them.  But lately they have been more closed off about it.  Only Emily wants to go in, she kind of has a bit of a crush on one of their characters.  Charlotte is wanting to stop as she she keeps seeing that what she writes isn't actually ending up the way she wants it to be.  And, what they've given in order to go into the worlds, well she doesn't want to keep giving it up.  But their father, a clergy man, doesn't approve of her writing, so she sees a life of just being a governess ahead.  And it is not something she looks forward to.  When Anne and Emily convince Charlotte and Branwell to take them back in, it seems things may be getting out of hand.  Some of the characters, especially Rogue, the bad guy that Branwell has written, are beginning to do things on their own, not written for them.

It turns out who they've made the deal with to go into the stories, doesn't want to let them stop.  And the characters in the story don't seem to want to let their authors end the story.  So all of it comes to a head when both Emily and Anne end up making a deal for something that they know will get their brother and sister to finally stop going.  Of course it won't be easy, and they must fight their way back out of the make-believe world of Verdopolis, and find their way back to the real world.

Like I said at the beginning, I liked the connections that gave kind of reasons for why their stories may have been the way they were.  From the way the author of this book wrote the stories and the personalities, you definitely saw what could have led to the depressing parts of both of the stories I mentioned above.  And there was some look  into their personal lives, even if not as much as I'd have liked.  It was an okay read for someone wanting to read about the Brontes, and for a story about being able to go into the worlds of the books you read and interact with your favorite characters.
Posted by Lisa Mandina at 7:00 AM