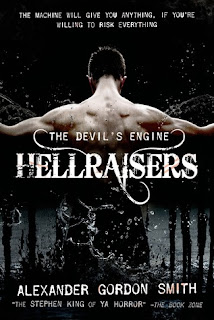 First, thanks to Edelweiss and Farrar, Straus and Giroux Books for Young Readers for allowing me to read this e-galley.  This is my first book by this author.  I know his other series, Escape from the Furnace, is really popular, and I may have to go back and give them a try now.  We'll see.  When I first started this one though, the beginning had me almost ready to quit. I didn't really like the characters at first, they didn't seem very nice, and there was too much action going on without any knowledge of what Pan was doing or why she was doing it.  But I stuck with it, and soon it slowed down enough to give me the information I needed,  and I began enjoying it more as I read.

There are two main characters and the story is told from each of their viewpoints alternately.  The first character is Marlowe.  He is a 16 year old kid who has been kicked out of school after school.  His mom is an alcoholic and his home life is horrible.  When we first meet him in the story, he has just done something to his Principal's car, getting him kicked out of what was really the last school that would probably ever take him after all his problems.  And so he leaves Staten Island and runs off to Manhattan.  When he gets to Manhattan he goes into a liquor store and tries to buy some beer.  The clerk doesn't believe he's old enough, which he isn't, and keeps giving him a hard time.  The longer Marlowe tries, more stuff starts happening outside the store.  Sirens, and yelling, and something happens that even crashes into the store, killing the clerk.  All the stuff that is going on outside is something to do with our other main character, Pan.  Pan is some kind of solder we find out at first.  She seems to be fighting demons.  And she keeps talking about getting a contract taken care of.  Plus, she seems to have superhuman strength and the ability to heal when she gets hurt.  Marlowe runs out of the store, after grabbing the clerk's gun, since he's not sure what is going on.  When he runs into a parking garage to try to hide from the cops, it turns out that is where all the ruckus is going down.

After this experience the people that Pan works with decide that they can use Marlowe. And while it takes a bit to convince him, eventually he decides he needs to join.  He finds a world where people go and make deals with the devil in something they call an engine.  They have people who are able to find ways out of the contract so that the agents/soldiers, like Pan, don't have to go to hell.  But there is a certain amount of time they must do it within, or they will have to fulfill their end of the contract, losing their soul.  This secret group doesn't just make deals with the devil for things they want, like money, riches, etc.  They ask for skills that will help them battle the devil and the demons that are trying to take over the world.  Not only that, there is another group, with another engine, and this other group wants to unite the two engines so that the demons can come out into the world.

Pan and Marlowe will have run-ins with these other people, two of them are the reason that Marlowe ends up joining.  A set of twins, working for the other side.  And while Marlowe works to fight them, to keep them from getting what they want and destroying the world, they keep trying to tell him that everything might not be quite as it has been explained by Pan's side.

There is definitely a bit of a cliffhanger, and I definitely need to read on and know what will happen next.  There is more to learn about the engine, and this book was just full of action, with a little section where we get to know some of the background info on the engine and the groups who have worked with it.  I'm ready to learn more in the next book, and I'm sure there will be lots more action!
Posted by Lisa Mandina at 5:08 PM