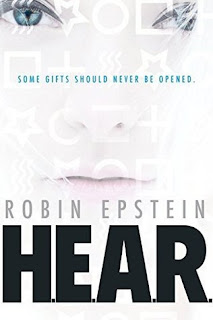 First, thanks to Edelweiss and Soho Teen for allowing me to read an e-galley of this title.  I feel like I haven't read a ton of books on ESP lately, it's been more about magical types of creatures, or fantasy worlds when the people could read minds.  So this was kind of a nice breath of fresh air.  I used to read a lot of stories like this when I was a teenager, one of my favorite series being the Psi Patrol trilogy.  I really liked where the story went, some of the twists were surprises, and I was left wanting more.  So here's hoping there will be at least a sequel to HEAR, if not more.

The main character is Kassandra.  She is going to spend the summer after her senior year of high school at Henley University with her great-uncle Brian.  She hasn't seen him in years.  But she got in trouble with the police just recently, and now this may be one of the few ways she can get into a good college.  Her parents have gone out of the country for the summer, which works well with her uncle's first rule for the students in this group, no contact with family for many weeks.  The program her uncle runs has four other students, another girl - Mara, and three boys - Pankaj, Alex, and Dan.  Kass doesn't know at first what the program is about.  But she meets three of the other members her first night in town, when she goes to dinner with Alex, and they meet up with Dan and Mara.  Mara is very suspicious of Kass, not really that friendly at first, even goes so far as to warn her off of the absent member of the group.  Dan has Asperger's syndrome, or something like it.  And while he is extremely smart, he is very cautious about touching or being touched, or even looking at other people much.  Alex is very attractive, and flirty, and it seems all the girls kind of like him. It is at this dinner that the others give Kass the news that the group has to do with ESP or being able to predict the future.  She thinks they're kidding her, even with all the proof they give her.  She does remember the camp she had come to when she was a kid here at Henley University, and she remembers Mara being there.  She also is sure that Mara wasn't quite that friendly back then either.

But when she gets to the first meeting with her great-uncle, she finds out they were correct.  She also meets Pankaj.  Now, they do tell how his name is pronounced:  punk-edge.  So as I read the book my brain still tripped over saying it exactly that way.  Guess it was good to know, but still.  And so the experiments begin.  They all seem to see something that has to do with a bomb or a shooting, or a hospital.  And shortly after there is a shooting at a local mall.  Turns out to be a professor from the school.  A friend of her uncle's.  This leads to the five all wondering if they can prevent or what they could have done.  At first Pankaj is very standoffish himself with Kass.  But after a poker game goes awry for Pankaj when he wins a watch and is accused of cheating, Kass helps him out of the situation, and they kiss to try to hide from the people chasing them.  But there's something in the kiss, and soon something develops between them.  Also going on during this time, both Kass, and it seems even Pankaj are wondering about some things in the background of the whole program.  An old friend of her uncle, last name Figg, is someone that they remember from the camp they attended when they were little kids.  Soon there is a prediction that three will join together leaving one out.  And that another one will die.  Most of the time Kass feels left out with the others, and so she is afraid she will be the one left out.

There is something else going on.  Alex feels quite often like they're being followed or watched, and it is true.  Some people aren't quite who they say they are, or don't quite want what they say they want.  Kass will even wonder if Pankaj is playing her, being able to figure out what she wants with his ESP and sway her to do what they want them to do.  She will be angry with things her father kept hidden from her, and she will learn things that she will have to decide whether to act on, or try to walk away from.

A great suspenseful book, with interesting characters and some great twists and turns.  Now, off to see if there is a sequel proposed anywhere!
Posted by Lisa Mandina at 12:14 PM