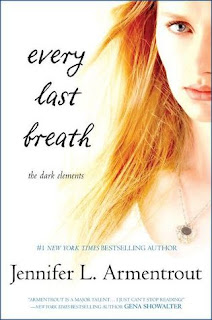 This book I had to buy as soon as it came out, even though I just now got around to reading it!  I finally went ahead and picked it up over some other books I was thinking about reading, so that I could go ahead and add another book to my series ender challenge total.  As always, I just loved the book, and loved getting more time with my one of my favorite book boyfriends, Roth.  If you haven't read the first two, White Hot Kiss and Stone Cold Touch, then you should probably click on the titles in this sentence and read those reviews first, because this will have spoilers for the first books.

Well, as we left off in the last one, we found out who the Lilin was.  And it had taken over the body of someone so close to Layla, Sam.  They were able to get away from it in the meetup at the beginning, partly because they found out that hurting the Lilin also hurt Layla.  Layla learns that the souls that the Lilin takes don't just go where they should, like Sam's should go to heaven, they go to hell.  Layla's new mission, until she can figure out a way to fight the Lilin, is to save Sam's soul from hell.  To do that, she finds out she needs to talk to Death.  Roth's friend/co-hort Cayman, helps her figure out how to do it.  At the same time, Cayman tells Layla that she needs to hurry up and decide who she wants to be with, who she truly loves, Roth, or Zayne.  If you know me, I've been team Roth the whole time.  And I was not disappointed.  Sorry, a bit of a spoiler, but it happens early on in the story, so even as I read, I was always wondering if something would happen to take Roth away, he is on the in trouble list with his boss, you know who.  And in that case, would she be able to return to Zayne?

Layla also decides to get her first tattooed familiar, and it is a fox.  Her plan to go to see Death is one that she knows she has to keep a secret from Roth, because there is no way he would let her go.  And she doesn't want him going to hell because of the whole being in trouble thing.  So she and Cayman devise a plan for her to get there.  Now, in the meetup with the Lilin, Layla finds that she has wings with feathers.  She soon learns there is more to the story of her mother, Lillith.  While Zayne is not happy with Layla's decision, he knows that she is still not evil, like the rest of the Wardens may think. And so he does his best to try to keep the "good" guys fighting with her.  Of course those that she knew and was friends with before have never doubted her.  And Zayne's father, who was like a father to Layla himself, also will see the error in his judgement from before.

There will be more good guys lost, but in the end, Layla and Roth, and Zayne and the others will get to what needs to be done in order to save the human race from an apocalypse and hell on earth.

A wonderful, fitting end to this story.  So many sexy scenes with Roth and Layla.  I love seeing just what Roth's familiars are like when they're in hell, and what they can change into, especially the kittens!  As always, I'm just led to want to read more of Armentrout's stories, and I will be certain to continue stocking up on them as I can!
Posted by Lisa Mandina at 9:41 PM