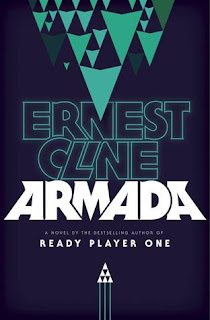 Once again I have been blown away by this author.  And I'm actually a little mad at myself for trading away the ARC I had of this title. Even though I've listened to both this and the author's first book Ready Player One as audio books from the library, I'd still like to own a copy of them now.  I'm not a big video game player, but I know enough about it, and the people who play them, that I was able to enjoy that part of the story.  And once again the author threw in some 80s references, which is the era I grew up in, and I love everything 80s.  There were references to movies, music, and video games of the time.  But it didn't take place in that time, it was more of a today's time period.  It's once again a science fiction story, but it reminds me of the Scream movie franchise in a way.  It's a science fiction story that kind of pokes fun at science fiction stories of the past, while still giving them the credit they are due.

Our main character is Zack Lightman, who is a high school senior who loves video games.  His father died when he was a baby, in a sanitation plant accident.  So while he's never really known him, he's looked up to him his whole life, and almost emulated him with the video games he's played.  He is one of the top 10 in the world in his favorite video game.  He doesn't know what he wants to do with his life, even though his mother is pushing him to figure it out.  They have money he can use to go to college from his father's accident settlement.  But really, he just wants to continue working at his part time job at a video game store.  When we start the story Zack is sitting in class and when he looks out the window he sees what looks like one of the alien spaceships from his favorite game.  No one else seems to have seen it, so he doesn't say anything.  The next day when he gets to school, another spaceship from his video game, this time it belongs to the good guys, the Earth Defense Alliance, and it lands on the school lawn.  Two men in black get out, along with Ray, his friend who owns the video game store where he works part time.  They are looking for Zack.  It seems that there really are aliens, and they need him to help them fight before the aliens destroy the world.  Turns out that the video games are actually training programs and that the government has been using them to find out who would be good at helping with this problem for the day it comes.  Unfortunately the day they come to get Zack, well that is really the last chance for the EDA to get the best pilots and fight the aliens, as they are sending an armada to destroy the Earth.

Zack is taken to a secret base where he and many, many other game players learn about how long the aliens have been around, and what is coming, and what they will be expected to do if they choose to enlist.  Zack becomes friends with a girl named Lex.  The first battle doesn't go that well when the aliens attack the site of the base and when one of the ships tries to come down to where they are all hidden beneath the ground fighting using their drones, well let's just say Zack disobeys orders and causes more problems.  After this Zack gets sent to the base on the moon.  Here he meets someone he never expected to meet, the person who is the number 1 in all the world in the video game Zack plays.  He makes new friends with others from the top 10 players who are also going to the moon base.  Once there he will find that his father's crazy theories he'd read about in his father's journals may be more true than imagined, and that everything may not be as it seems.  It seems the aliens attack and then give us enough time to catch up technologically before they attack again.  When the enemy ships fight, most often it is  like the stormtroopers in Star Wars, they miss most of their shots, just like what happens in video games as well.

I won't tell you anymore.  You have to read and enjoy it for yourself.  Let's just say I loved all the cameos of scientists like Carl Sagan, Stephen Hawking, and Neil deGrasse Tyson.  Finding out how the movies out there tie in to the aliens, and how long NASA and the government have known about the aliens was also a lot of fun.  Zack was great, realistic, sarcastic, and so much fun.  You have another cast of great supporting characters, just like in the first book by the author.  If you like science fiction whatsoever, you need to read this.  Ernest Cline is quickly becoming one of my auto-read authors.  Both audio books were also read by Wil Wheaton, and I really do enjoy listening to the way he brings the story and the characters to life.  Also, while it totally ends in a satisfactory way, I would love a sequel with more about the aliens and what happens at the end.
Posted by Lisa Mandina at 7:00 AM