Audiobook Review: Yes, My Accent is Real: and Some Other Things I Haven't Told You by Kunal Nayyar 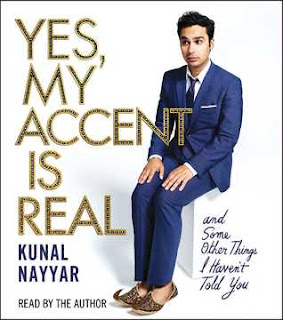 This was the last audiobook I downloaded from the public library to listen to.  And it was narrated by the author, one of the stars of my favorite tv show, The Big Bang Theory, he plays Raj.

First off, he is so funny!  I'm sure just reading the book would have been funny, but listening to him read his own words was even funnier.  As the title says, yes, the accent is real.  And one thing that is so funny is thinking about the episode of The Big Bang Theory when all the guys are teasing Raj for how he says mustache.  Because that is how he really says it!  I wonder if it got written in because of something that happened in real life with the cast.

He tells the story basically going through most of his life, how he was born in England, but actually lived most of his life in India.  We learn about his childhood, how he was a top badminton player, as well as other things that he did as a child.  It is fun to hear about all the holidays that Indians celebrate.  That is even funny because of the humorous stories he has to go with each holiday, as well as the fact that each holiday part includes him saying that particular holiday being discussed is his favorite festival.  So, all of them basically.  He talks about his first kiss, and how it was influenced by Winnie Cooper on the tv show The Wonder Years, played by Danica McKellar. Why that is relevant other than telling about that memory, is because there was an episode of The Big Bang Theory where Danica McKellar plays a girl that Raj hooks up with!  So hearing him talk about the experience of actually kissing "Winnie Cooper" is wonderful.

We learn about his time in college, and all the things he dealt with as someone from another country. He talks about when he first started acting really, during college.  We hear about his romantic escapades in college.  All told in such humorous fashion.  I have to say that hearing about his parents, well they seem to be some of the best parents you could ever have.  Nothing at all like his character Raj's parents.

Then, the end is where we finally get to hear about when he got on the tv show.  And one of my favorite parts was the very end when he meets his wife.  Hearing about the wedding and how all the traditions work was really pretty magical.  There was one thing he said during the part with meeting his wife and falling in love that really struck me as well.  He says whenever people ask him for advice about whoever they're dating, he asks the if this person is kind.  People will always say the person has a good sense of humor, or is attractive, etc.  But if someone is kind, that shows something real about them.  And it makes such sense.

I enjoyed listening to him talk, and knowing his accent is real, that makes the tv show even better.  I think I might even have fallen in love with him just a bit listening to his story.  He truly seems like such a nice, funny guy.  I definitely recommend this book, and if you like audiobooks, I'd suggest listening to it.  Another fun audiobook.  I'll have to find some more memoir types of books that are read by the author, probably other comedians I'd guess.
Posted by Lisa Mandina at 7:00 AM