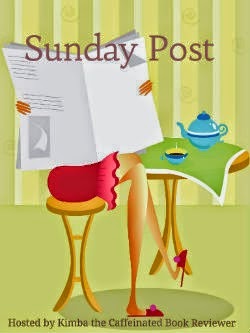 The Sunday Post is a weekly meme hosted  @ Caffeinated Book Reviewer. It’s a chance to share news ~ A post to recap the past week on your blog, showcase books and things we have received and share news about what is coming up on our blog for the week ahead. See rules here: Sunday Post Meme.  I have several things coming up this week, so decided to do this plus Stacking the Shelves today.

Last week on the blog:
I did have one other post for a tour type entry as well.  I've gotten so much reading done this summer while recovering from surgery that my reviews are having to be scheduled ahead of time, since I usually already have the day I finish them with a review post.  I'm 15 books ahead of my schedule for my Goodreads goal of 125 books to read this year.  I won't bump it up though, as school is starting back up this week, I'm guessing my reading time will be going down. I did get released to go back to work from my surgery on Thursday, so that's great. But had some issues at the dentist with an unexpected root canal, and then a temporary crown that I had to go back the next day and get fixed because it was causing way more pain than the tooth by itself had been.

This week on the blog:

Some big excitement this week!  My 5 year blogoversary is coming up and I will have a pretty great giveaway going up in 6 days!  So check back for that.  Also, tomorrow I will be starting the sign up for the September is for Sequels Giveaway Hop that I'm doing together with I Am A Reader from September 2nd-9th.  The sign ups for the challenge will be coming later this week as well probably.  Like I said, I am required to be back at school on Tuesday, although I will probably go do some work in my library tomorrow before I HAVE to be there, so that I can get things I want to get done, instead of meetings and such.  I'm excited to go back for my 2nd year as a high school librarian.  I'm not nervous this year, I know what is expected, and know how things work, including my co-librarian.  So I'm looking forward to a smoother year.  I know I will have at least 2 reviews this week also, as was one of my main blog goals for the year.  Then I will fill in with either a Top 10 Tuesday, or maybe a Waiting on Wednesday. 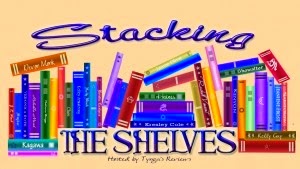 Stacking the Shelves is hosted by Tynga's Reviews.  It is a way for us to share the new books we have collected.  I might have gone a little overboard at the library one day this week when I told myself to run in and grab a book really quickly so that I didn't have to go by home to grab one when I finished my current read at the doctor's office.

Checked out from Library: 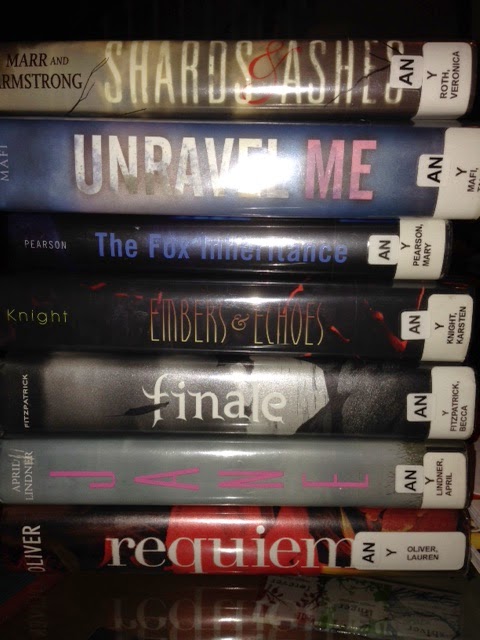 Yeah, I went into the library for one book, and came out with 7.  You see I just walked around the teen section at the local public library, and grabbed books out as I saw them.  At first I kept looking because all the books I'd grabbed were like 400 pages, and I really had wanted to just find a short one, around 200 pages.  Then as I grabbed books that I wanted, I didn't want to put them back and so just kept piling them up.  As you can see, other than 2 of those, the can all fit into my Prequels and Sequels challenge, as well as part of my September is for Sequels Challenge.  So I'll have to see which ones I can re-check out to read during September.