Review: Get Even by Gretchen McNeil 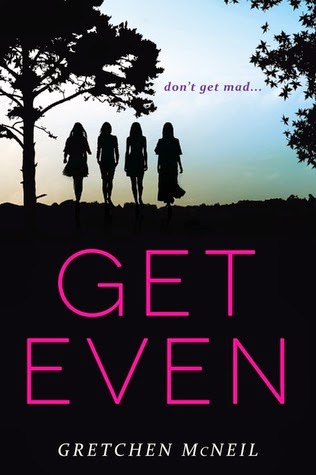 First I must say thank you to Harper Collins and Balzer and Bray for allowing me to read an e-galley of this from Edelweiss.  Gretchen McNeil is an author that I heard lots of buzz about with her book Ten, before I even read any of her books.  So far 3:59 is my favorite of her books, but Get Even is a close 2nd!  At first as I was reading I though, oh, it's going to be a contemporary romance type of book.  But of course, it was more, and boy did it even get to be more than I'd expected.

There are four main characters:  Kitty, Olivia, Bree, and Margot.  They aren't friends in "real" life, no one has ever really seen them together.  But ever since a project their 9th grade year, they decided to form a group called DGM for short, or Don't Get Mad.  All of them have dealt with bullying in some way in their past.  Margot used to be overweight, and was bullied, so badly that she tried to kill herself.  Kitty knew about it from a friend who got kicked off their volleyball team.  Olivia is one of the popular girls, and so is around friends who do it all the time.  And Bree's best friend is a boy named John, who gets teased a lot, because his last name could rhyme with a bad term for gay people.  They all go to a Catholic school where the bullying seems to be rampant, to the point that the adults often ignore name calling and even somewhat support the bullies at times.  DGM has a goal to stop the bullying.  They don't make stuff up, they only take what is already out there about these bullies and make it clear to everyone else.  The other students for the most part are fans of the DGM.   But not the administrator, Father Uberti, or F.U. as the girls call him snidely.  And also not one of the teachers, Coach Creed, who is really a big bully himself.

Something has changed now, someone is sending the four girls manila envelopes with pictures and other clues in them.  They are being led to a military school where the Coach used to be. And then one of their new students, a douche-bag type of guy named Ronny dies.  Right after DGM gets things to try to humiliate him for what he's done.  Some of the clues paint their fellow DGM members in a suspicious light, taking away what trust they have for each other.  Secrets start being kept from each other, while other secrets from the past start to get revealed.  The girls of DGM must decide if they can still trust each other to do what is right, the mission of DGM, or if the person behind all the secretive notes is one of them.

Let me just say this ended on such a HUGE cliffhanger!  I had to go to the author's Facebook page and tell her that there was no way I'd be able to wait a whole year to know what happens next.  She said next summer is when the next book comes out, and that ARCs could be out as soon as December.  Believe you me, I'll be keeping my eyes wide open for it on both Netgalley and Edelweiss, as well as possibly researching to see who the publicity person is that I might be able to talk to so that I can make sure to get this read as soon as possible.  What a great mystery that totally kept me guessing, and with that ending, left me guessing still!