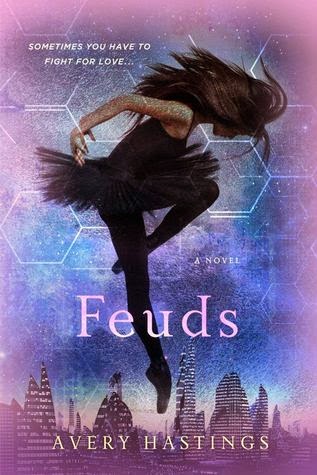 Thanks to Edelweiss and St. Martin's Griffin for allowing me to read an e-galley of this title.  I am a huge fan of dystopian and this sounded right up my alley.  Overall I felt it was a good story, while I was left with something feeling missing, but not in a way that I won't read on as I'm sure it must continue!

The main character is Davis Morrow.  As you can probably tell from the cover, she is a ballerina.  And a perfect ballerina.  She is one of the Priors, people born perfect, the higher class you might say.  They are perfect in every way, and hers is dancing, which she is even getting ready to compete in the tryouts for the Olympics.  But there is a lot of unrest in this society.  The Imperfects, called Imps for short, are in unrest.  Davis's father is a politician who wants to help keep the two classes apart more efficiently.  The other character is Cole.  Cole is an Imp, but a very attractive one.  He also fights in what are called the FEUDS.  These are cage fights basically, to the death in some cases, and the Priors go and place bets on them.  Cole has been sponsored by the rival politician to Davis's dad so he can fight.  And then Cole is asked to go find Davis and get a picture of her kissing him.  Cole doesn't know about who her dad is, but he goes in order to keep his sponsor happy.  But at the party where they meet, he is able to pass as a Prior and Davis is definitely attracted.  But there is trouble.  There is a girl that Davis thinks is just really drunk, but she turns out to be sick.  Cole takes her back to where the Imps live and asks his brother's friend who is kind of a doctor to look at the girl.  It turns out she has a virus called Narxis, something that only the Priors are susceptible to because of their "perfect" genetic makeup.  The Priors don't like to deal with this though, and so they keep dumping the bodies down at the Imps' neighborhoods.  Davis starts feeling like she may be sick, and people she knows are also dropping out of sight.  Of course it will come to light that Cole is an Imp, and in the worst of ways, when Davis follows him to a fight.  But she will overcome this issue as she knows that he has an idea of what is going on, and her feelings for him are so strong.

Definitely a bit of a formulaic story, but not in a bad way.  It was still an enjoyable read.  There is even a bit of a shocker that we find out about Davis and her dead ballerina mother towards the end that makes me eager to read on and find out how it plays into the story.  If you're looking for a good dystopian society type of read, and you don't mind not a totally different idea then you will enjoy this.  Now it is definitely an insta-love story, but I've come to a conclusion about that which makes me able to enjoy it with no issues.  These are teenagers.  When you were a teen, or maybe you still are, don't you fall in love with people, and it seems like they are the one?  I know my first "love" was like that.  And even though now I look back and realize it wasn't really love, these are teens in tenuous situations that make ever having another love possibly impossible.
Posted by Lisa Mandina at 8:00 AM