Review: Where She Went (If I Stay #2) by Gayle Forman 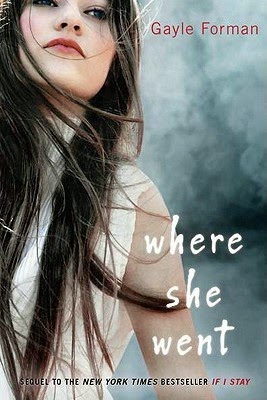 So after getting invited by a local indie bookstore to an advanced screening of the movie If I Stay, I decided I needed to hurry up and read the 2nd book in the series, so I was able to check it out from the high school library where I work.  Now, it wasn't exactly a book from Adam, Mia's boyfriend's, point of view during the time when Mia was in the hospital. Which is what I thought it was.  SPOILER ALERT It was actually what happened after she woke up.  If you've read the book, you know that it ends right at that point.  So the readers are left wondering what next.  How will she go on without her family, how will her relationship with Adam go on after the strain of her applying for Julliard?  And will she make it into Julliard?  The movie gives you the answer to that, as you will also know from this second book.

Adam's band Shooting Star has made it big.  We pick up with Adam three years after everything happened.  He's alone now, Mia went on to Julliard, and months after she left, she stopped calling or returning calls and texts.  And so Adam moved on, albeit not necessarily happily.  He's a bit of a mess.  He's had a falling out with his band, but not to the point that they're not together anymore.  He just always travels separately, and even stays in a different hotel than they do.  He's dating a movie star named Brynn now.  Even with all the fallout between the band members, they all have in a contract that they cannot talk about him and Mia in any way to reporters. And so far it's worked.  However Adam is still not happy, he misses Mia, but also has become superstitious, as well as very anxious, having to even take medicine for the anxiety.

Where this book starts is Adam in New York City, having an interview, with someone who does ask him about Mia.  He throws a bit of a fit, and leaves.  The rest of the band has already flown to Europe for the next part of the tour, but he didn't want to fly on Friday the 13th, so his flight doesn't leave that day.  He wanders around NYC, hoping not to be noticed, when she sees a sign for a performance by Mia.  He buys a ticket and goes, he thinks incognito.  But he is recognized, and after the performance, Mia has someone ask him to come backstage.  This leads to them talking, and spending the next several hours together catching up.  In between the chapters of this, we have flashbacks where we find out just what happened to Adam, and how he developed all the issues he's suffering from.

The book lets us follow along on this chance meeting to discover if their relationship will finally get closure, or if they might be back with the one they were always meant to be with.

A good read, not as good as the first, but still enjoyable.  It was hard to read just how far Adam had kind of fallen, and at first very hard to understand why Mia did what she did. But their conversations make it clear to Adam, and helps the reader to understand.  And the ending is a good one, one that you'll probably be wanting as you finish the book.  So I definitely recommend reading on, and do go see the movie.  It was so good I left with tears drying on my face.
Posted by Lisa Mandina at 12:05 PM

Email ThisBlogThis!Share to TwitterShare to FacebookShare to Pinterest
Labels: Gayle Forman, If I Stay, Library, New York City, Where She Went