Review: Made for Two by Karen Lenfestey 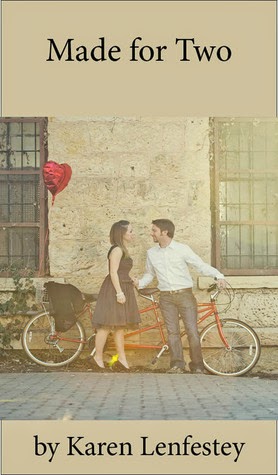 This is an e-novella that I was alerted to for 99 cents on Amazon and it sounded pretty good.  It was about a teacher, who went back home after an issue she had at the inner city school in Chicago where she taught.  She tried to reconnect with her old love while she was there.  They had broken up when she moved to Chicago to teach, because he didn't want to leave.  He wanted to stay and run the family bakery.  Well, she had also been best friends with his sister.  And when Diane goes to the bakery to see Tim, his sister is very hateful and doesn't want her to even talk to him.  It seems that Tim has been in a pretty big almost depression since Diane left.  And he kind of hides out in the back of the bakery.  Diane also is home with her mother, who has been alone since her dad died.  And she finds out that her mom isn't really leaving the house much, even to the point of having her groceries delivered.  So Diane sets out to find the love that her mother lost before her dad, and reconnect them, even as she tries to get Tim back.  All while trying to get her teaching job in Chicago back, even if it might cause problems for her and Tim.

A quick read.  Not bad.  A pretty predictable story, other than one thing that had happened to Tim was not really what I'd expected exactly, but it definitely gave the story its little bit of uniqueness I guess.

The September Sequels Giveaway Blog Hop is open for sign ups for one more day by clicking the left button below, and my September is for Sequels Challenge you still have until September 15th to get signed up for with the button on the right.

Email ThisBlogThis!Share to TwitterShare to FacebookShare to Pinterest
Labels: Amazon, e-novella, Karen Lenfestey, Made for Two