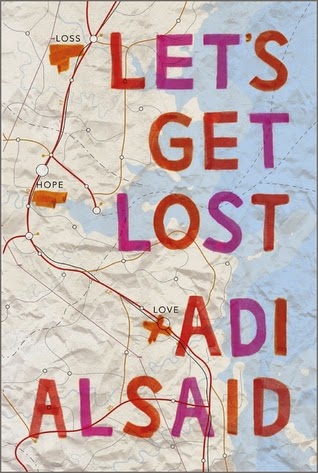 This was a book I wanted to get ahold of so bad at BEA, but the lines for Harlequin are always so long, and I'd have missed out on many other authors I really wanted to see.  So, I missed out.  But then I went into the Barnes and Noble where I work part time last Friday for our store's 10 year anniversary party and I found an ARC on the breakroom table!  So I read it quickly as it came out earlier this week.  And while I'm not usually a contemporary fan, this was a good, quick read, full of some good lessons, and humorous bits.

It's basically about a girl, Leila, who is taking a road trip to see the Northern Lights, and the people that she meets along the way.  But the first 4 parts of the story are told through the eyes of the people she meets.  First there is Hudson.  He lives in a small town in Mississippi, and he meets Leila when she brings her car into his father's auto shop.  He helps get it fixed up to be safe for her road trip.  There's something about Leila though, something he can't take his eyes off of.  Something that causes him to take a chance and offer to show her around his small town, and hang out with him the rest of the evening.  They do, and they connect.  But their night together leads to keeping Hudson from an important interview the next morning, and they part on bad turns.

Next is Bree who Leila picks up hitchhiking.  Bree has a bit of wild streak, doing things to "carpe diem".  She lost her parents and then her sister was an overbearing guardian so she ran away.  But Leila gets her.  And they do some wild things together, really pulling Leila out of her comfort zone at times, but not in a bad way.  Until one thing they do gets them on the wrong side of the law.  And then Bree will have to decide if she can count on her sister to help, or if it is worth going to jail to keep her distance.

After Bree is Elliot, who has just been turned down by his best friend at prom.  He'd always felt more than just friendship with her, but was never able to speak his feelings out loud.  His parents had him watch a bunch of 80's teen movies when they first moved to America, and so he decided he'd make his declaration into something big at prom.  Well, it didn't go as planned.  And now he goes out, is drinking, and almost decides to lay down on the ground in the middle of the  highway.  He changes his mind at the last minute, but his hand carrying the bottle of alcohol hasn't quite moved out of the path of Leila's car, and it smashes against her mirror.  As he's now bleeding, she takes him to the hospital.  After hearing his story, and how Elliot talks about this girl, Leila decides to help him "get the girl".  One missed chance after another, until he finally finds her, and sees that there may be a reason she didn't return his feelings.

The final stranger Leila picks up is a girl named Sonia.  Sonia lost her best friend and boyfriend Sam about 7 months ago.  She is in Canada now at his sister's wedding rehearsal.  Sam's family had taken in Sonia as one of their own.  But she now seems to have feelings for another boy, the groom's brother.  And of course she is ashamed to seem like she is moving on so fast.  And so when he kind of gives her an ultimatum, she runs out wearing his tuxedo jacket.  Leila finds her at a rest stop and gives her a ride.  No aim of where to go, and they end up back in the US.  Unfortunately Sonia figures out that she left her purse back at the rest stop, and it had her passport in it.  So they are not having much luck getting back into Canada.  Which is a problem because she has the rings in the pocket of the tuxedo jacket she took off with. So now they must find a way back across the border, which leads to some very funny bits, made me think of the movie Rat Race in a way.

And finally we get the story from Leila's point of view.  She's reached Alaska to camp and see the Northern Lights.  I won't tell you what brought her here, I feel you have to read the story and understand her before you know that.  You may have some of the same guesses I did, but you may be wrong, just as I was.  It is a pretty happy ending in its own way.

A really fun contemporary read.  It definitely deserves all the hype it is getting.  Probably one I will be purchasing for my school library as well.
Posted by Lisa Mandina at 9:00 AM